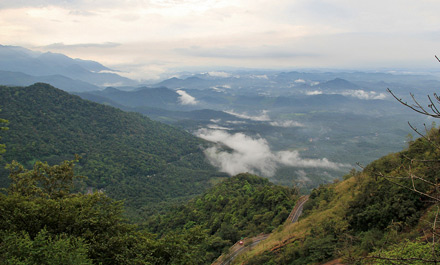 The green ghats en-route to Wayanad has nine hairpin bends, each turn taking one to a higher altitude offering a better view of the picturesque plains below. This route explored by a tribal was developed by the British.

At a height of 2100 metres, the towering Chembra Peak is located near Meppadi in the southern part of Wayanad. It is the tallest of peaks in the region and climbing this peak would test ones physical prowess. The climb up the Chembra Peak is an exhilarating experience, as each stage in the climb unfolds great expanses of Wayanad and the view gets wider as one goes up to its summit. Going up and coming down the peak would take a full day. Those who would like camp at the top are assured of an unforgettable experience.

Located in the southeastern part of Wayanad, and approachable from Kalpetta as well as Sulthan Bathery, Neelimala is a trekkers delight, with options for different trekking routes. At the top of Neelimala, the sight is a breathtaking one with a view to the Meenmutty falls located near by and the valley in the foreground.

Located close to Neelimala the spectacular Meenmutty falls can be reached through a 2 km trekking route from the main road connecting Ootty and Wayanad. It is the largest of waterfalls in the district of Wayanad, and adds to ones curiosity with its three stage falls dropping from about 300 metres.

Yet another waterfall that attracts visitors to Wayanad is the Chethalayam falls, located close to Sulthan Bathery in the northern part of Wayanad. This waterfall is smaller in size when compared to Meenmutty. The falls and the adjoining areas are ideal locales for trekking and a haunt for bird watchers.

Pakshipathalam is located deep within the forest in the Brahmagiri hills at an altitude of more than 1700 metres. The region predominantly comprises large boulders, some of them really massive. The deep caves found here are home to a wide variety of birds, animals and distinctive species of plants. Pakshipathalam is located near Mananthavady and a visit to the region would require a 7 km trek through the forest, starting from Thirunelli. Visitors to Pakshipathalam are to seek permission from the DFO- North Wayanad.

The dam at Banasura Sagar is reckoned as the largest earth dam in India. The dam is located in the southwestern part of Wayanad district and is close to the Karalad Lake. The project area of the Banasura Sagar Dam also has the start point for treks to the Banasura Peak. An interesting feature is a set of islands that were formed when the reservoir submerged the surrounding areas.

Town:
Nearby Transport Terminals : Thamarassery, Kalpetta Bus Stands.
Airport:
Nearest airport is Karipur international airport at Kozhikode, which is about 100 km away from Wayanad city. Karipur is connected to many cities in India including Delhi, Mumbai and Chennai.
Railway Station:
Nearest Railhead to Wayanad is Kozhikode railway station, which is nearly 110 km from Wayanad. Taxi services are available from railway station to Wayanad costing about Rs 2,000. Kozhikode is well connected to all major cities in India and regular direct train services are available from Kozhikode to Trivandrum, Kochi, Chennai and Bangalore.
District:
Wayanad
Longitude:
11.585140
Latitude:
76.073479