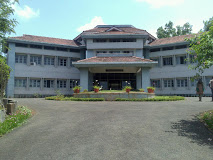 A drop of water becomes part of many forms; rain, snow, rivers, lakes, seas, oceans and the like. How much precious is water to us? Its true value will only be realized when water becomes a rare commodity or when it becomes no more part of our surroundings.

And to emphasize the immense value of water in our daily lives and those depend on it equally for survival, like plants and animals, a museum dedicated to water is about to come up at Kunnamangalam in Kozhikode. The upcoming ‘Water Heritage Museum’ highlights the significance of water in relation to man and and also its usage in day-to-day life, with special emphasis of Kerala’s traditions involving the use of water.

The museum, slated for opening in three month’s time at Kunnamangalam in Kozhikode District is an initiative by the Centre for Water Resources Development and Management (CWRDM). As per the authorities, the upcoming museum for water has interesting displays in the form of pictures, statutes, still life etc. Driven by the imagination of the scientists and other staff of the CWRDM, their concepts got transformed with the help of painters, sculptors and other artistes, who made use of clay, plastic, hay, plaster of Paris, wax and also waste material.

The entrance to the museum itself has a touch of traditional Malayalee hospitality in the form of Padipura, which is a form of multipurpose entrance, once used to be a symbol of houses belonging to aristocratic families of Kerala. Near the entrance, one would also find a 3.5 mtr high statue, depicting the theme ‘The earthward descend of River Ganga‘.

Some of the attractions inside the upcoming Water Heritage Museum is the display, featuring a Malayalee woman, drawing water from a well, located close to the kitchen. A phenomenon that one could associate with houses, especially in rural Kerala. The water wells are located in the northeastern corner of the house, and very close to the kitchen. This location of the well has significance, as it is believed to enhance wealth, divine grace and also happiness in the household.

The significance that water has as part of religious practices is also highlighted in the water museum. Also finding place in the museum are still models and paintings, enlightening visitors on the various methods used by Keralites for irrigation, since ancient times. Associated with these methods are names like Surangam, Thulathekku, Chakram, Pettiyum Parayum, Kenikal etc.

The Canoli Canal that contributed to the commercial advancement of Kerala and Idukki Hydroelectric project are some of the other exhibited items at the water museum in Kozhikode. The unique relationship of water and the State of Kerala is further highlighted in the section depicting the lifestyle and activities of the waterlogged region of Kuttanad, which is one of the rice bowls of Kerala. Similar geographical settings, where water dominates in shaping up the lives of people like the backwaters of Vembanad and the Kole wetlands gets due attention in the Water Heritage Museum at Kunnamangalam.

Another interesting section of the water museum that invites the visitors’ attention are the displays, highlighting various traditional agrarian practices of Kerala. And this includes the method of Pokkali farming, making of coir, lime shell harvesting, inter cropping, mixed farming, harvesting seasons of Kerala and others.

When one mentions about water and Kerala, River Nila, popularly known as Bharata Puzha occupies a special place in the hearts of Keralites. This river, which has been a source of inspiration for those living by the banks and also to writers in Malayalam literature to come up with outstanding literary works, finds a special place in the upcoming water museum. The museum has displays pertaining to literary personalities and scientists associated with River Nila, as well as traditional teaching centers like Alathiyur, Thrikandiyur, Ezhuthumadam etc.

With some bare facts on water and featuring the unique, traditional usage of water by Keralites, the upcoming water museum in Kozhikode is sure to provide its visitors an interesting time. So, do make it part of your travel itinerary, the next time, while you are in Kozhikode.