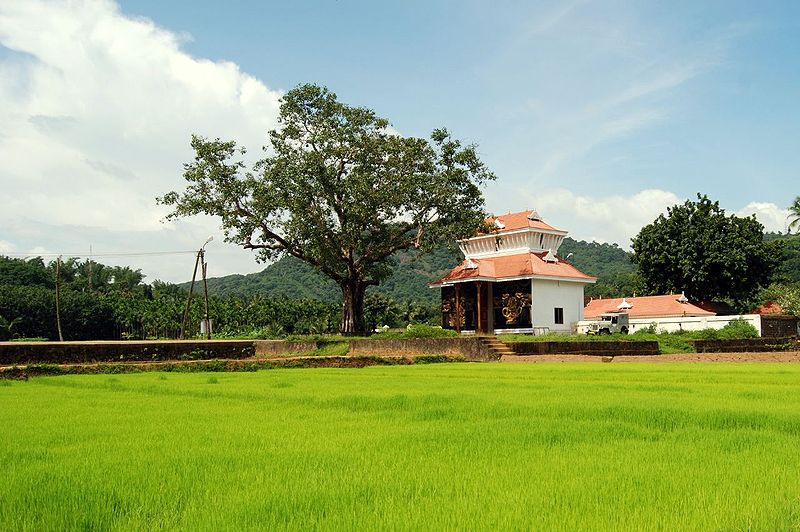 Vadakkencherry is a small town in Palakkad district of Kerala state, south India, which is 40 km north-east of Thrissur and a same distance south-west of Palakkad.

It is under Alathur Taluk in Palakkad district. National Highway 47 passes through Vadakkencherry. Vadakkencherry Vela and “Eakadesi Villaku” is one of the famous festivals in Kerala. Though the spellings are different, many people confuse Vadakkencherry with Wadakkancheri of Thrissur.

The name Vadakkencherry is originated by joining of two words – Vadakkan (Northern) and Cheri (Street).

Palakkad Fort is an old fort situated in the heart of Palakkad town of Kerala state, southern India. It was built by Haider Ali in 1766 ACE and remains one of the best preserved forts in Kerala.

Nelliampathy Hills are extremely fascinating and offer an easy escape from the soorching summer of Palakkad and is this cool hill resort.

Malampuzha Garden is the Vrindavan of Kerala. The Malampuzha Garden and reservoir have a scenic setting with the forested hills of Western Ghats forming the backdrop, making it one of the foremost tourism centers in the State.

An irrigation project was commissioned here in 1968 with an estimated cost of Rs.234.25 lakhs, consisting of an earthen dam with a spillway section across the tributaries of Ayalure River.

The Silent Valley National Park, with an area of 90 sq.kms, is situated in the north eastern corner of the district.

Mangalam is mainly occupied by settlers from other parts of the State. Mangalam dam is located near the NH 47

The Siruvani Project is in Sholayur Panchayath. The dam constructed across the River Siruvani, is for supplying drinking water to Coimbatore Corporation of Tamilnadu.

Meenkara Chulliar is a fascinating spot by virtue of the dam, garden, fish ponds and natural beauty.

Parambikulam wild life sanctuary extends over an area of 280 sq.kms.

Kanjirapuzha Dam is situated nearby and the water spread of the dam lies in a single stretch J.P.Smrithi.

Loknayak J.P.Smrithi Vanam and Deer Park is in an extent of 100 acres of reserve forest at Walayar in the border of Kerala

It is the native place of the Late Chembai Vaidyanatha Bhagavathar, the doyen of Karnatic Music.

There are 10steps of Waterfalls at Meenvallom, the originating point of ThuppanaduRiver.

Attappady is a tribal abode.

Across the lush green fields, two kms. from ChitturTown on the banks of river Sokanasini an old building where Thunchathu Ramanujan Ezhuthachan, regarded as the father of Malayalam Language, lived in the 16th Century

There is an ancient Jain temple at Jainmedu,

To invoke the blessingsof Nellikulangara Bhagavathy, the people of Vallenghy and Nenmara conduct a festival on 20thMeenam (March-April) every year

Juma prayers are held in Ottappalam mosque on Fridays

The festival is conducted for nine days and ends withan arattof the Diety Hemambika in KalpathyRiver.

The important festival of Manappullikavu at Yakkara is the annual Vela.

Meenvallam Waterfalls is situated in Palakkad district. Originating from the Thuppanadu River - a part…

Pothundy Dam is situated en route to Neilliyampathy about 8 km from Nenmara. It is…

Malampuzha Dam and Garden in Palakkad

Malampuzha, a little township on the foothills of the Western Ghats takes its name from…