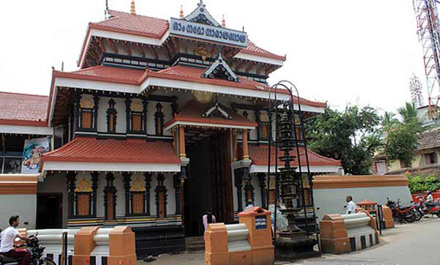 The Thiruvambady Temple in the Thrissur district is  dedicated to Lord Krishna. This temple is one of the major participants of the Thrissur Pooram and the colourful procession, called the Madathilvaravu, from this temple to the Vadakkumnathan Temple as a part of the Pooram ceremony is well known all over Kerala.

The Thiruvambady Temple and Thrissur Pooram festival are today almost synonymous to the general public.  However the latter is the climax to the sustained round the year activities of divine worship aimed at providing a spiritual avenue for peace, tranquility and mental uplift of thousands of devotees far and near.

The temple is located 1 km north of the Vadakkunnathan Temple and 800m from Swaraj Round, on the Shornur Road.  It is only 10mts drive from Thrissur Railway Station and Bus stand.   The Punkunnam Railway station, which is a C-grade station, is only 250 mtrs from the temple.  In physical appearance the temple is a small one; but in quality and immensity of rites of worship, it stands on a par with the Mahakshethras here.

The main deity at Thiruvambady is Unnikrishna (Lord Krishna in infant form). Goddess Bhagavathy is consecrated in a shrine just on the left of Lord Krishna and worshipped with equal ardour.

Lord Ganesha, Dharmasastha and the founders of the temple are worshipped in separate shrines outside the Nalambalam.

Deities known by Dravidian names – Kukshi Ayyapa, Manikanda, Ghandakarna, Raktheswari and Bhairava are also enshrined here, just outside the walls of the temple.

The idol of Krishna, now worshipped here, was originally the Parthasarathy idol in a temple at Edakkalathur, a sleepy hamlet, about 15km from Thrissur. The temple had the same name – Thiruvambady – and there were many shrines too, for Bhagavathy, Sastha etc. Some four centuries ago, when life and property in the village were threatened by communal conflagration, some villagers under the cover of darkness, surreptitiously carried the idol to Thrissur and entrusted the same to a pious Namboodiri couple at Kachanappilly Illam, 200mtrs from the present Thiruvambady temple. The childless couple considered it a blessing in disguise from the Almighty and as they fostered the idol for worship, they felt it was their own unborn child. The benevolent Lord who appears before a devotee in the form he wants, opted to cast aside Partha Sarathy’s whip and to pick up the flute in one hand and extended the other to receive the butter of devotion from the ‘foster parents’. A small temple in the form of a ‘sala’ was erected 200mtrs, South of Kachanappally Illam and ‘Unnikrishna’ was enshrined.

The saga of Devi is no less enchanting. The Kachanappally couples were ardent devotees of Kodungallur Devi and the male used to foot a distance of 40km, up and down, every month, to have a darshan of the Devi at Kodungallur. With the passage of time and deteriorating health conditions, per force, he had to bid farewell to the Deity and plod homeward with a broken heart. However, just like a human mother, the Devi could not bear the pangs of separation from her dedicated devotee; her ‘Chaitanya’ followed the Bhaktha to his abode and consequently got enshrined on a granite pillar in the central courtyard within the Nalukettu. It is this consecrated pillar with the Devi ‘Chaitanya’ which is installed in the Sanctum to the left of Unnikrishna and worshipped as the compassionate Balabhadrakali (Kali as a  child).

The aura of the divine duo-Unni and Devi – makes Thiruvambady a spiritual beacon of beatitude, like Brindavan, providing solace and succour to thousands of devotees from far and near.

The poojas and other thanthric rites are performed, as envisaged in Thanthra samuchaya, with meticulous care, and this has upgraded the small temple qualitatively to the stature of a Mahakshethra.