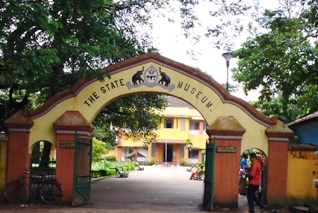 It is a complex of two museums and a Zoological Garden. Head
of office is Superintendent. Zoological garden, Art Museum, Multipurpose
Museum, Education Section, Veterinary Section and office are the different
sections functioning here.

The State Museum and Zoo, Thrissur was established in the
year 1885 at Viyyur, when Shri. Sankarayya was the Diwan Peshkar of Cochin
State, It started functioning at Chembookkavu in 1913 where the state museum
and Zoo is situated now.

Develop amongst
visitors an empathy for wild animals.

Develop among
visitors Knowledge on the antique and archaeological objects.

Give the visitors
chances to learn about our cultural heritage.

Wild life
conservation with special emphasis to the species occurred in the western ghats
which are endangered.

Preservation of
the valuable art and cultural heritage of mankind.

Town:
Only one Kilometer from Trichur Town. Accessible by Auto-rickshaw, car and bus.
Airport:
Nearest airport is Nedumbassery which is about 55 Km away from Thrissur.
Railway Station:
Situated at Chembukavu in Trichur district ,3 km from Trichur Railway station and Transport bus stand.
District:
Thrissur