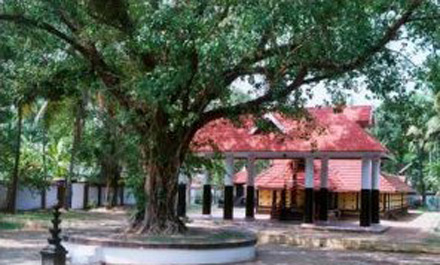 Thamaramkulangara Sree Dharma Sastha temple is one of the most prominent temple in the royal city of Tripunithura, Kerala, India. It is dedicated to Lord Ayyappa worshiped as Dharma Sastha.

According to anecdotes Lord Dharma Sastha of Chamravattom (in Malappuram District) followed one of his priests from Morakkala Mana who had shifted to Tripunithura. Lord Dharma Sastha assumed the form of a lizard and came with the priest comfortably by sitting on his traditional umbrella made up of palm leaves. Since then Lord Ayyappa is worshiped here bringing prosperity to the place.

The temple was initially owned by Morakkala Mana, but the prosperity of family was challenged and the day-to-day affairs were in question. The high priest finally approached the Maharajah of Cochin and handed the temple over to him in 1930s. The King ordered the renovation of the temple and the Nithya Nidhanam (daily pooja) was funded by Nadumittom Devasom. This state of affairs continued with minor changes until the Fall of the Kingdoms when India got Independence. Again the temple affairs was in disarray.

In 1953 the youth in and around the temple came together for the betterment of the temple, precincts and restart the temple festival. This movement strengthened up with time, involving in many activities. These people in 1963 formed the Thamaramkulangara Ayyapa Seva Samithy (TASS). TASS spearheaded a development campaign which drove a dramatic rise of the temple from obscurity to center stage of temple landscape in Ernakulam. In 1984 with others, the temple was transferred to Kerala Uranma Devaswom Board.

Makaravilakku, the annual festival of this temple, bears a unique status. It occurs in January. As per the Malayalam era, the first day of the Makaram Month is celebrated as the Makaravilakku in the temple. Thamaramkulangara Ayyappa Seva Samithy organises the events of Makaravilakku in a way to keep the holiness of the temple precincts. The six days of celebrations begins with the Holy Flag hoisting (Kodiyettam) by chief priest (Thantri) five days before the Makaravilakku day.

Some of them are:

Sasthaam Paattu is a traditional art form found in the central Kerala. It is also known as Ayyappan Paattu. Its a musical art form in which a team of people sing, songs praising Lord Ayyappa by playing a unique percussion instrument called ‘Udukku’. The main attraction among the songs is the song that describes the birth of Lord Ayyappa.

In Thamaramkulangara, Sasthaam Paattu is performed on the first Saturday of Vrischikam as per the Malayalam era. In the noon of same day, Annadhaanam is performed by devotees and TASS volunteers to all the devotees, which has a unique menu and is popular.