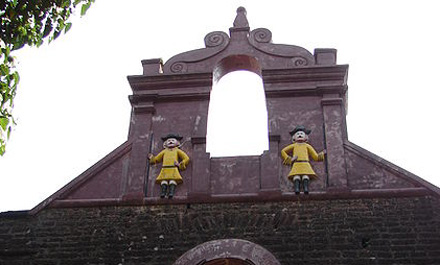 Elegant and steeped in history, the Thalassery Fort stands in Thalassery, about 22 km south of Kannur, near the Municipal cricket stadium.

The East India Company authorities came to Thalassery in 1683 and started a godown or warehouse here. At that time, the land was ruled by the Kolathiris, and with their permission, the British built a small fort on a small hill called Tiruvellapadkunnu. In 1708, they strengthened the fort. The fort helped the British to establish a stronghold in Malabar and in 1776, the British made it their administrative centre.

The fort, though originally established as a godown for cardamom and pepper, became a strategic centre for the military activities of the British.

It was there that Arthur Wellesley planned out his strategy to fight the great warrior, Pazhassi Raja. During the 1780s, when Hyder Ali tried to conquer Malabar, the fort witnessed more fighting and bloodshed.

After Independence, the fort housed many government offices. Later, recognizing its historical significance, it was handed over to the Department of Archaeology, its present custodian.

Architecture
The fort has been constructed in a strategic location to withstand assaults and invasion. The square fort with massive laterite walls arrests one’s attention with its colossal structure itself. One unique feature of the fort is its entrance which is through the top of a giant wall.

It is said that a mixture of quicklime, white of egg and sugar candy were used in the construction of the fort that is flanked by bastions. Intricately carved doors, secret tunnels leading to the sea and a short lighthouse are some of the other peculiarities of the fort.

The tunnel, now closed, led to the sea, from where those seeking a sudden getaway could do so.  The lighthouse stands on the western side and a dangerously winding staircase leads to the top.

There are two underground chambers that were used to store goods like pepper and cardamom.  It is said that the coins of the East India Company were minted here.

From the fort premises, one can view the nearby Holy Rosary Church. Other centres of worship in the vicinity are the Sardar Palli mosque and the Jagannatha temple.