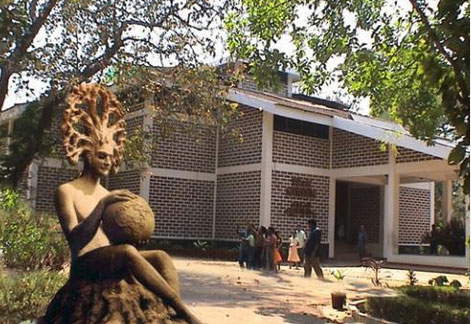 The well-known Teak Museum is located at Nilambur in the Malappuram district of Kerala. Regarded as the first of its kind in the world and the only one in India; it is a house to the treasures of historical, aesthetic and scientific aspects of Teak. The museum was established on the campus of the sub-centre of Kerala Forest Research Institute (KFRI) in 1995. The museum was established here owing to the historical significance of the region. The world’s first Teak (Tectona grandis) plantation was raised in Nilambur way back in the 1840s in order to ensure a steady supply of Teak timber to the British.

The fascinating abundance of information on this wonder tree attracts an entire horde of tourists to visit this museum throughout the year. The extensive root system of a 55-year-old teak tree exhibited in the portico for welcoming the tourists is itself metaphorical of the past, present and future of the museum.

The ground floor of the double-storied museum exhibits a translite of Kannimara Teak, the oldest naturally growing teak tree located at the Parambikulam wild-life sanctuary and the life-size replica of the trunk of the largest known teak tree growing in the Malayattoor forest division. Another translite of a giant tree present in the oldest teak plantation in the Conolly’s Plot at Nilambur offers the visitors a glimpse into the teak plantation activities undertaken 160 years ago. Some of the other other attractions here are the traditional granary and a miniature model of sailing vessel called Uru made of teak wood.

Teak poles of varying sizes and qualities obtained during the process of ‘Thinning’ of teak plantations are also displayed along with the necessary details of standard classification of teak poles. The depiction of foliage, flowers, fruits and bark of the tree gives us a deeper insight in to the other characteristics of the teak. Here, one can also find the large stump of a 480-year-old teak tree brought from Nagarampara forest range in Kottayam division.

Detailed description on the flower, fruit and natural regeneration of teak as well as the prominent characteristics of these species of trees are exhibited in the first floor of the museum. In addition to this, the various methods of seed-grading, presowing treatment, preparation of teak stumps, vegetative propagation of teak and the different stages in the complete rotation cycle of teak from seed to mature tree are also on display.

Apart from teak, the mueusm also has a collection of over 300 butterflies, moths and insects found in teak plantations. Another exclusive section in the museum deals with the various physical disorders of teak, disease-causing insects and pests, plantation and other nursery diseases.

Some of the special attractions of the Teak Museum at Nilambur are a series of interesting paintings portraying tree felling operations, a collection of photographs on the phonological events of teak at different seasons, exhibits on traditional harvesting tools and wood samples of different ages from various parts of the world.

The portraits of great figures who had carved out milestones in the successful establishment of teak plantations as well as of those who had laid the foundations to the plantation forestry in India like H.V.Conolly, Chathu Menon and T.F.Bourdillion offer a strong perspective of a glorious era spanning a period of 150 years. This museum also has a world-class library on teak and a mini auditorium for audio-visual presentations.

The 800-metre long bio-resources nature trail on the museum campus is indeed, an interesting one. This nature trail passes through a heavy growth of shrubs, trees and bamboos. One can also find the different species of birds and reptiles here. There are 50 naturally grown tree species and 136 endangered and near-extinct tree species of the Western Ghats planted in this nature trail. About 58 species of birds, both resident and migratory, has been recorded in this area. A medicinal plant garden consisting of 150 species is also another attraction worth seeing.

Vakkad is a popular beach destination situated close to Ponnani in the district of Malappuram,…

The well-known Teak Museum is located at Nilambur in the Malappuram district of Kerala. Regarded…

Kadalundi Bird Sanctuary is a bird sanctuary located in Malappuram district of Kerala. The sanctuary…

Located in the Kurumbalangode village of Nilambur taluk in Malappuram district, Adyanpara is famous for…

Vazhikkadavu is a small town in Nilambur taluk of Malappuram district, India. It is located…