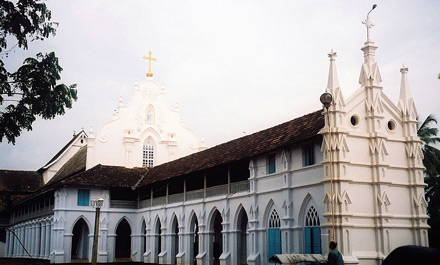 St. Thomas Syro-Malabar Catholic Church, Palayur is located at Palayur (also spelt Palayoor), in Thrissur district in Kerala on the west coast of India. According to tradition, it was established in 52 AD by St Thomas, one of the twelve apostles of Jesus Christ.[1] It is the oldest church in India and is called an Apostolic Church credited to the Apostolate of St. Thomas who preached and also started conversion of people to Christianity here. It was part of the seven churches that he established in India; the other six churches were established at Cranganore, Kokkamangalam, Kottakavu (North Paravur), Kollam, Niranam, and Chayal (Nilackal). The original small Church structure has been retained at the oldest site. But substantial improvements around it were carried out during the 17th century by Reverend Fenichi, as necessary, without sacrificing the main sanctity of the place.

St. Thomas traveled from Muziris (Kottakkavu or Kodungallur) and landed at Palayur by boat through the backwaters. At that time, Palayur was a stronghold of the Brahmins and also of Jews. He came to visit the Jewish merchants at Palayur at “Judankunnu” (meaning the hill of Jews) and to preach the Christian gospel. The place has since become a dry land but its historicity as a boat jetty called locally as ‘Bottukulam’ has been preserved as a monument to St. Thomas.

Of the seven churches originally established by St. Thomas, only three namely, Palayoor in the Syro-Malabar Catholic Archdiocese of Thrissur, Kottakkavu in the Syro-Malabar Catholic Archdiocese of Ernakulam-Angamaly, and Niranam in the Malankara Orthodox Diocese of Niranam could claim continuity, while the remaining four churches have undergone several changes in their locations.[6]

It is stated that a Hindu temple that was abandoned by the Brahmins was converted into the present church. Further, as a proof of Jewish settlements existing when St Thomas arrived here in 52 AD, ruins of a synagogue could be seen near a Hindu temple, close to the church. Temple remnants in the form of broken idols, sculptures and relics of the old temple can also be seen near the precincts of the church, in addition to two large tanks near the west and east gates of the church.

It is also stated that the conversion of Brahmins has resulted in such an aversion among the Nambudri Brahmins that they do not even accept cold water or tender coconut water anywhere in the vicinity of the Church.[citation needed] It is recorded that St. Thomas stayed in India for 17 years;4 years in Sindh (now in Pakistan), about 6 years in Malabar Coast and 7 years at Mylapore in Tamil Nadu. The Indian Postal Service of the Government of India brought out two commemorative stamps, in 1964 and 1973, in honour of the historic arrival of St. Thomas in India in 52 AD.

St. Thomas was proclaimed ‘The Apostle of India’ by the Holy See. His skeleton remains were brought to India in 1953 by Cardinal Tisserant. Furthermore, a document called ‘Grandavariola’ kept by a local Brahmin family (who had moved out from Palayur during the preaching ) testifies to the date of the gospel work of St. Thomas. The document states:

Historical legend records that when St. Thomas landed at Palayur, he witnessed the sight of Hindu Brahmins, after their ablutions in a local tank, offering prayers by chanting mantras (the Vedic tradition of India for spiritual transformation) hymns to god in the form of Argyam or (Tharpanam) (water held in the palms) of water to the Sun god, a practice also said to be followed in Harappan and Persian cultures. Amused by the sight of water being thrown up by the Brahmins, from the palms of their hands, which was falling back, he challenged the Brahmins stating that the water they were offering was not being accepted by the Sun god as it was falling back into the tank. He made a deal with them stating that his God would accept the offer of water if he threw it up in the same way as they did, but water would not fall back. If he proved this then his God was superior and the Brahmins would have to embrace Christianity. He performed this miracle (summoned the Holy Trinity, completed the sign of the Cross and threw water held in his palms up into the air, which remained still in the air at a height) and with this miracle he converted a number of Brahmins and Jews in Palayur to Christianity. Thereafter he baptised the converts in a nearby water tank. The Brahmins who did not convert to the faith gave the epithet of the ‘Shapa Kadu’ or “Cursed Place” to Palayur and migrated to Vembanad to purify themselves.

Following the migration of the Hindu Brahmins from Palayur, the Church was built incorporating the old Hindu temple, which was deserted. The church, as built, was thus a fusion of Hindu architectural style in respect of ornamentation with a Persian Church plan. The roof of the church raises like a tower above the nave. The approach or entrance is like a Hindu style mandapa (in Indian architecture it is a pillared outdoor hall or pavilion for public rituals).

An Italian missionary built the new church around the small old teak wood church after taking due permission from the locals who were not only superstitious but also sentimental about retaining the old Church. However, after the church was fully completed and after the priest had delivered a proper sermon, the local people agreed to demolish the old wooden structure, which resulted in the Church looking elegant. The original altar consecrated by St. Thomas is still retained. But during Tipu Sultan’s invasion of Kerala in the 18th century, the church was destroyed by fire. Thereafter it was re-built.

A major festival that is held every year at the venue of the church, which lasts for two days, has a striking similarity to the Hindu festival held at Trichhur (district town 28 kilometres (17 mi) away from the church) on the same days, with lot of fan fare of pageants, orchestra and pyrotechnics.[citation needed] During the lenten season, the popular festival celebrated is called the ‘Palayur Mahatheerthadanam’ or Great Pilgrimage conducted under the auspices of Archdiocesan, when thousands of devotees, without caste distinction, participate in the festival.