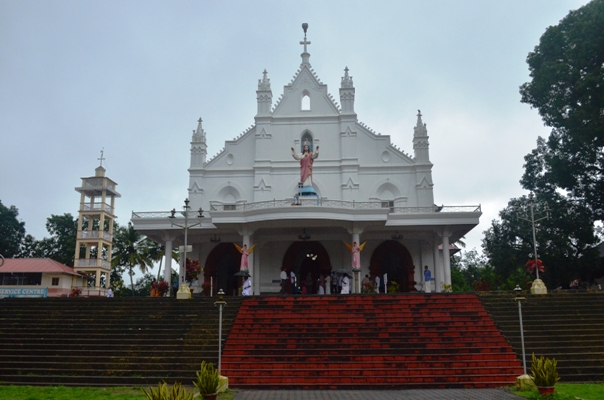 The main structure of the church, which began to be known as St.Alphonsa Shrine Church following the canonization of Sr. Alphonsa on 12th October 2008 had been built in the year 1945 as a cemetery chapel of St. Mary’s Church Bharananganam. Sr.Alphonsa is the first nun ever to have been buried there. Her tomb now stands at the very place where her mortal remains were buried on 29 July 1946.

During the period 1963-64, a side wing with family tombs was added. With the completion of new tombs in the parish graveyard in 1985, burial in the cemetery chapel was discontinued and the mortal remains of the dead interred therein except those of St.Alphonsa were exhumed and inhumed in the newly built vaults/chambers.

The office of the postulator and the lodging for pilgrims were housed in the Alphonsa Bhavan situated close to the Forane Church.It was built in 1971 after demolishing the two-storied presbytery, the first ever of its kind in Kerala of the 17th century vintage. The living quarters for priests, accommodations for pilgrims, the Alphonsa Museum, an audio-visual gallery and a stall selling devotional objects are here.

A unique historical memorial, the papal podium stands adjacent to the Pilgrim Church. Gracing the dais at the Nagampadam stadium at Kottayam on 8th February 1986, Pope John Paul II of blessed memories beatified Sr.Alphonsa and Fr.Kuriakose Elias Chavara. The podium erected in sync with indigenous architectonics was bought by the Diocese of Palai and translocated at Bharananganam.

Close to the pilgrim churches stands the grotto and are displayed granite plaques engraved with Alphonsian logia.

The Pilgrims can get devotional objects as well as books and CD’s on the life of the saint blessed colourful pictures associated with the Saint, statuettes, statues, garlands, biographies, CDs, DVDs, candles, multi-tiered lamps, edible offerings from St.Alphonsa Stall functioning close to the pilgrim centre. It is open from 7.30 A.M. to 8.30 P.M. Holy Oil, candles, neyappam (a confectionery offering) can be had from the opening counter nearly. Open counter is the facility functions near the main stall from 7.30 a.m. to 6.00 p.m. The pilgrims can make the payment here for liturgical celebrations in fulfillment of their vows. Blessed oil, nercha appam (offerings of indigenous confectionaries), candles, calendars, diaries, etc., can be had from here. After 6.00 p.m. the service is offered at the main stall. An extension Stall functions in the museum building from 8.45 a.m. to 4.45 p.m.

One of the main offerings to the saint is neyappam, a deep fried confectionery. It is invariably served during the memorial rituals of St.Thomas Christians. It gives physical healing to many devotees. They are distributed in packets at the pilgrim centre. Saris, lamps, lanterns and flowers are offered at the Shrine for favours received or to be received. Supplicants who seek the saint’s intersession so that they may be blessed with children place a cradle at the tomb and pray ardently.

In the Alphonsa Tower situated parallel to the state highway and close to the pilgrims church is displayed a stunning 30’ tall stained glass portrait of the Saint.

O  Lord  Jesus, hide me in  the  wound of your sacred heart. Free me from my desire to be loved and esteemed. Guard me  from my evil attempts to win fame and honor. Make me humble till I become a small spark in the flame of love in your Sacred Heart. Grant me the grace  to forget myself and all  worldly things. Jesus,  sweet beyond words, convert all  worldly  consolations  into  bitterness for me. O my Jesus, Sun of Justice, enlighten my  intellect and mind with your sacred rays. Purify my heart, consume me with burning love for you, and make me one with you.

Vimalagiri Cathedral in Kottayam is one of the significant cathedrals under the Diocese of Vijayapuram.…

Elaveezhapoonchira, A Beautiful Valley in Kottayam

Elaveezhapoonchira is a beautiful valley situated in Kottayam district. It extends to over several acres…