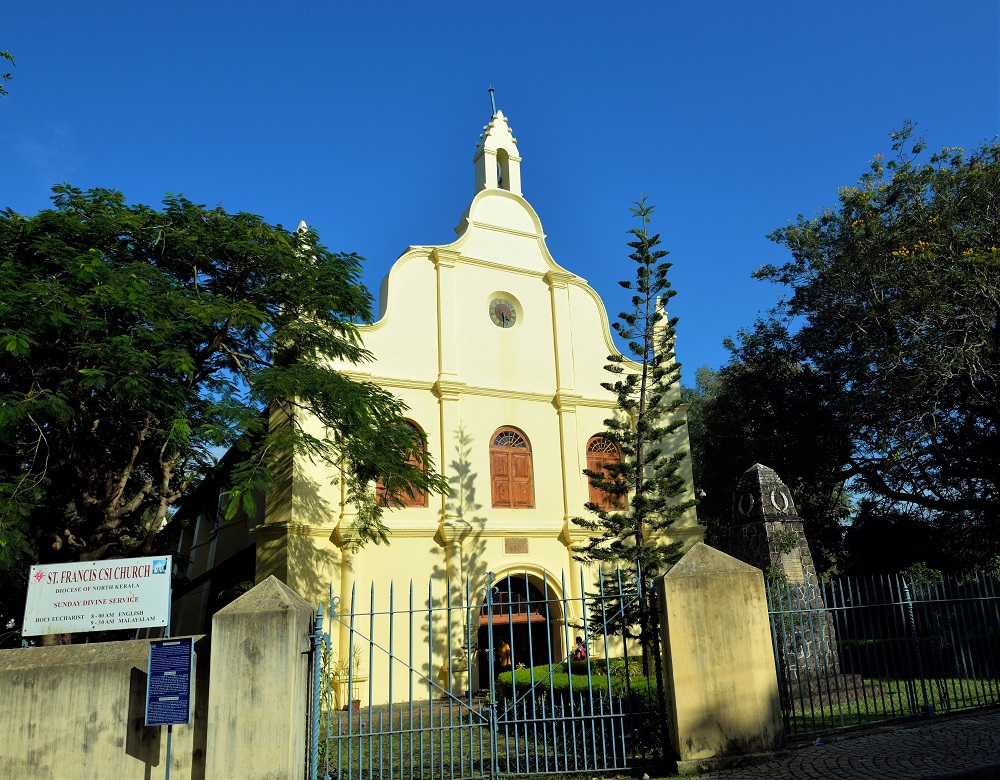 St. Francis church is located in Ernakulam district. It was constructed in the year 1503 and is the oldest European church in India. Initially this church was in wooden structure. Later with the permission of Kochi Raja, the Portuguese reconstructed this church into a stone building. The roof of this church is covered with tiles on timber frames. The doors are semi circular. St. Francis church was initially called as Santo Antonio who was a saint in Portugal. Then it came to be called as St. Francis in the year 1663. The Dutch converted this Church into a Protestant church and in 1804, it became an Anglican Church.

Towards the end of 1524 Vasco Da Gama returned to Cochin (his first
visit was in 1502) where he died on the Christmas eve of that year and
was buried in this Church. Fourteen years later, his remains were
shipped to Portugal and deposited at Vidigveria where they remained
until 1872 when they were removed to the monastery of Jeronimos in
Lisbon, its present abode.

The Church remained in the Order of St. Francis until the arrival of
the Dutch in 1663. One of the first acts of the Dutch was to order all
European Catholic priests to quit their territory, after which they
demolished all the convents and churches of the place, except the Church
of the Franciscans, which they reconditioned and converted into their
Government Church. On 8th January 1664 they celebrated their first
service with a parade of all arms on the anniversary of their entry into
the city. During the reconditioning, the stone altar and the wiring
guilded screens were removed and taken to the Church of Vypeen, which
the Dutch permitted the Roman Catholics to build in 1665, and the
communion table and the rostrum furniture were installed in their stead.
A tablet over the west door indicates that the Church was renovated in
1779.

The Dutch cemetery here is one of the oldest cemeteries in India.
Hundreds of Europeans left their homeland on a mission to expand their
colonial empires. The tombstones in this cemetery are the most authentic
record of these Europeans who changed the course of history of this
land. The cemetery was consecrated in the year 1724. It is owned and
maintained by St. Francis C.S.I. Church.

When the British captured Cochin from the Dutch in 1795, they
permitted the Dutch to retain possession of the Church for a time. In
1804 the Dutch voluntarily surrendered the Church to the Anglican
Communion when it was passed to the Ecclesiastical Department of the
Government of India. But when Rev. Thomas Norton came to Cochin in 1816
on his way to Alleppey to inaugurate the work of the Church Missionary
Society, he found that the Church was just bare walls, the interior was
very dilapidated and part of the roof had fallen in. Later, the building
was sufficiently restored to enable Bishop Middleton, the Metropolitan,
to use it for a confirmation service during his Episcopal visit to the
Malabar Coast.

The change of name of the patron saint was presumably due to the
Anglicans, for it was not until 1870 that any reference was made to St.
Francis Church. The gravestones laid on the walls of the Church were
taken from the floor of the grave in 1886. On the northern sidewall
Portuguese gravestones can be seen and the Dutch gravestones on the
southern wall. The Vasco da Gama stone is on the ground at the southern
side. A table inside the building over the west door shows that it was
“repaired by the Government of Madras in 1887, being the fiftieth year
of the reign of Victoria, Queen of Great Britain and Ireland and Empress
of India”.

The Church possesses an interesting link with the past in the form of
the ‘Doop Book’, the old baptism and marriage register from 1751-1804,
which may be accessed in the vestry. It was maintained for 40 years in
the handwriting of Predikant Cornelies and was sent to London in 1932
for getting the leaves repaired by experts. It was then rebound in the
original style. A Photostat copy takes the place of the original for
scrutiny by visitors.

The Church became a protected monument in April 1923 under the
Protected Monuments Act 1904. The Cenotaph in memory of the residents of
Cochin who fell in the First Great War erected in 1920 and was unveiled
by the Governor of Madras on 21st October of that year. The boundary
walls were erected in 1924.

The Clock on this Church was erected in the year 1923 in memory of
Hal Harrison Jones, a former Managing Director of Aspinwall &
Company.

The Pankhas or Fans found in the Church are a reminder of the British opulence of that period.

A few memorial brass plates and marble slabs were erected in memory
of very important persons who had dedicated their own lives to this
Church and the society. The present furniture were installed when it was
under the Anglican order of worship.

There is regular worship service in this Church on all Sundays and commemorative days. On weekdays it is kept open for visitors and tourists.