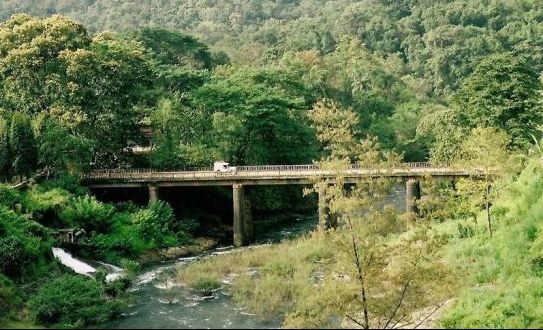 Peruvannamoozhy, a scenic village located 60 km from Perambra in Kozhikode, Kerala has been included in the list of eco-tourism destinations in Kerala with the Tourism Minister inaugurating the eco-tourism project here on August 10, 2008. This 130.70 million rupee project at Peruvannamoozhy site being implemented by Pannikkottur Vana Samrakshana Samiti and is funded by Kerala Tourism. There is a dam at Peruvannamoozhy. The Peruvannamoozhy dam site set amid hills is a beautiful picnic spot.The region offers immense scope for picnicking. Janakikadu near Peruvannamoozhy is a thick forest which attracts thousands of tourists every year.There is a wide variety of birds in this forest.

An ecological hotspot in the Western Ghats, the eco tourism destination of Peruvannamoozhy is home to over 680 species of rare plants. The facilities available here include wild animal rehabilitation centre, bird sanctuary, crocodile farm, snake park, spice garden, trekking and boating. The reservoir here provides facilities for speedboat and rowboat cruises.There is a beautiful garden called Smaraka Thottam,which is built in the memory of the freedom fighters of the region. Uninhabited islands add to the charm of the place.

Peruvannamoozhy is a fascinating eco tourism centre is the water spread area of Peruvannamuoozhy reservoir in Kozhikode district. It is an excellent area for understanding the conservation benefits provided by forests.Rich in wildlife, birdlife and butterfly population,the area is an ideal location for nature enthusiasts. The irrigation dam and the garden nearby are added attractions.As part of eco tourism initiatives, the following facilities have been created:

As such, the dams and water reservoirs of Kerala are being planned to be turned into tourist hotspots under the eco-tourism initiatives of Kerala Tourism. A committee has been formed for this purpose with the Additional Chief Secretary, Department of Water Resources, in the lead. The plan proposes to execute the development of basic facilities in fifty odd eco tourism centres in Kerala including Peruvannamoozhy. The quarters near such reservoirs and dams will be modified into hotels with all modern amenities.