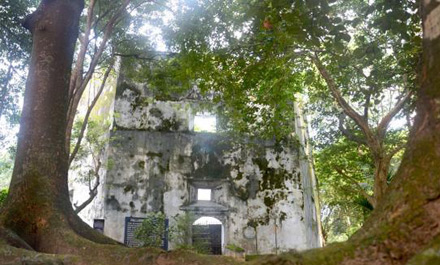 Stepping into Kochi is like stepping into the labyrinthine alleyways
of history where you encounter the fresh wafts of the bygone era that
comes from the ancient streets, palaces, museums, synagogues,
cathedrals  Kochi is all this and more.

Amid the huge trees that romance the skies, untouched by the hubbubs of the town,enduring the snags of time, there stands a fort in its geezerhood – the Pallipuram Fort.

Built in 1503 by the Portuguese the Pallipuram Fort is considered as the oldest surviving European monument in India. Also known by the name Ayikotta or Alikotta the fort is a gigantic hexagonal structure.

The architecture of the fort is quite fascinating
with a hexagonal outpost and the lowest floor raised to a height of
five feet.

Laterite, mortar and wood are used for the construction. The
layout enables to mount as many guns as possible commanding all
quarters round the fort.

There is a cellar inside the fort, which was
used at that time as a magazine. There is an open space inside,
affording easy passage to the cellar. The local people believe that the
cellar is a tunnel that leads to the Cheraman Masjid in Kodungallur
(Kodungalloor).

The fort fell into the hands of the Dutch army
in 1663. In 1798 the fort was purchased by the Travancore Maharaja and
is now a protected monument of the Kerala State Department of
Archaeology.

Pallipuram got its name from the nearby Manjumatha Church, dedicated to the Lady of Snow (manju
in Malayalam denotes mist or snow) which was also built by the
Portuguese roughly at the same time as the Fort. In Malayalam the word Palli
means church and thus the surrounding areas of the church became
Pallipuram. There is an interesting legend associated with the name of
the church. Accordingly, when Tipu Sultan attacked Kochi and tried to
destroy the church a miraculous mist came down, enveloped the church
and hid it from him.

Town:
Ernakulam District is one of the most important district of Kerala State and is very well connected with roads to other cities of Kerala and India too.
Airport:
Cochin International Airport, about 20 km from Ernakulam town to Vypeen Island
Railway Station:
Ernakulam Junction, about one km from the main boat jetty to Vypeen Island
District:
Ernakulam
Longitude:
10.169953
Latitude:
76.184529