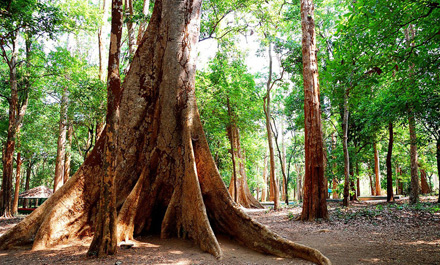 Nilambur, better known as the Land of Teak Plantations, is a major town located in the Malappuram district of Kerala. This place occupies a special place in the history of Malabar with its vast forests, natural beauty, unique wildlife, charming water bodies, royal residencies and a vibrant colonial past.

This strategically positioned town shares its borders with the Nilgiri Hills, Eranadu, Palakkad and Calicut. Located on the banks of River Chaliyar, Nilambur has salubrious greenery and fertile landscapes. The town enjoys good connectivity and is accessible from a number of neighboring towns and districts such as Malappuram town (40 km), Kozhikode (72 km), Thrissur (120 km), Gudalur (50 km) and Ooty (100 km).

A Sightseer’s True Delight – Tourist places in and around Nilambur

The sightseeing options in Nilambur are plenty. Conolly’s Plot and The Teak Museum are the most visited tourist attractions of the town. Adyanpara Falls and Vellamthode Falls attract visitors with their cascading streams and scenic surroundings. Nedunayakam, a place located close to Nilambur, is known for its rain forests, elephant camps and wooden rest houses. The small village of Aruvacode attracts tourists with its pottery work for which the place is best known.

The Bio Resources Park of Nilambur is yet another tourist hotspot and the butterfly park situated close by attracts nature lovers. New Amarambalam Reserved Forest is situated next to the Silent Valley National Park and is famed for the rare species of birds it houses. The Nilambur Kovilakam Temple, the presiding deity of which is Vettakkorumakan, draws devotees and visitors throughout the year.

There are a good number of resorts and home-stays in Nilambur where travelers can enjoy their time in serenity watching beautiful surroundings. The restaurants in Nilambur offer delicious and traditional Malabar food which is absolutely lip smacking. With a pleasant climate and good connectivity the town of teaks lures travelers to enjoy and explore.

Nilambur enjoys a unique culture due to its peculiar geographical position. The Royal Kingdom which ruled the town prior to the advent of British and the administrative changes carried out under Madras Presidency gave Nilambur distinct cultural traits. This scenic town is famed for an art form named Nilambur Vettekkoru Makan Paattu (more popularly known as Nilambur Paattu). This art form is performed annually at the Nilambur Kovilakam Temple.

Nilambur has its share in the architectural legacy of Kerala as well. The town has a bunch of royal residencies known in the name of Kovilakam. These were the dwelling places of local Kings and rulers of the bygone era. Kovilakams of Nilambur gather attention from all over the word, primarily due to their magnificent wall paintings and amazing wood works.

Conolly’s Plot, the oldest and the most renowned teak plantation of the world, is situated in Nilambur. The town houses India’s first Teak Museum which attracts thousands of visitors every year. The museum elegantly displays everything a plant lover would want to know about teak tree.

Nilambur holds another world record for world’s tallest and the biggest teak tree is preserved in the Nilambur Teak Preserve. The town is well famed for its bamboos as well- a fact which is attested through its very name. The name of the town is derived from two words: Nilimba (meaning bamboos) and Ur (Place).

Nilambur broad gauge is one of the oldest (originally meter gauge) rail lines in Kerala, built to ship teak out of the Nilambur forests to Shoranur on the main line. The Nilambur–Shoranur railway is a branch line of the Southern Railway Zone in Kerala state and one of the shortest broad gauge railway lines in India. It is a single line with 66 km length running from Shoranur Junction (in Palakkad district) to Nilambur Railway Station (in Malappuram district). This station is just 4 km from the town of Nilambur on the Kozhikode–Ooty highway.  Shoranur–Nilambur Road passenger trains are running on this route. It is 40 km away from Malappuram town.

Town:
Nilambur is well connected by road and buses to Nilambur are available from Bangalore, Mysore, Sultan Bathery, Kozhikode, Thrissur, Palakkad and Kottayam. Kerala State Transport (KSRTC) runs frequent bus services to this town. Nilambur is connected to all neighboring places by road. Travelers can take private buses as well to reach this place.
Airport:
Calicut International Airport, located at a distance of 45 km, is the nearest airport to Nilambur. Calicut Airport is well connected to all major Indian cities and a few cities in the Middle East. Those who arrive by air can avail taxi services from the airport at an approximate charge of 600 INR. The journey from airport to Nilambur will take about 60 minutes.
Railway Station:
Trains are available from Nilambur railway station to a few destinations such as Palakkad, Shornur, Chennai and Kochi. The major railhead located close to Nilambur is Shornur and there are frequent trains running from Nilambur to Shornur. Trains to all major Indian cities are available from Shornur.
District:
Malappuram
Longitude:
11.279844
Latitude:
76.237635

Vakkad is a popular beach destination situated close to Ponnani in the district of Malappuram,…

The well-known Teak Museum is located at Nilambur in the Malappuram district of Kerala. Regarded…

Kadalundi Bird Sanctuary is a bird sanctuary located in Malappuram district of Kerala. The sanctuary…

Located in the Kurumbalangode village of Nilambur taluk in Malappuram district, Adyanpara is famous for…

Vazhikkadavu is a small town in Nilambur taluk of Malappuram district, India. It is located…