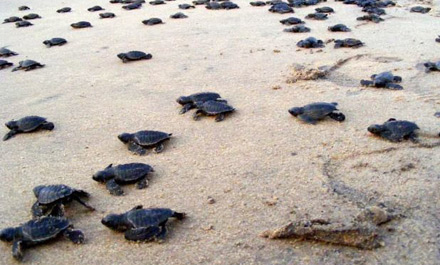 Kolavipalam beach also known as the ‘Turtle Beach’ is
located south of the Murad River about 30km north of Calicut. The turtles
that frequent the beach are no ordinary turtle; these are the famous Olive
Ridley turtles (Lepidochelys olivacea) which are endangered by sand
mining etc.

The turtle season is in September when you can see the
turtles visiting the beach searching for places to lay and hatch eggs. Since
the children of the area started to care for the endangered turtles in
the 1990s, all the local population has grown involved in trying to protect
the turtles as well as force changes in local industrial activities
which has result in extreme land erosion. Turtles return to the same place to
lay their eggs, so the frequent changes to topography leaves them very
confused.

You can visit the conservation hatchery and see the baby
turtles before they are returned to the sea.

Over the years, conservation efforts spearheaded by residents in the area have developed into a mass movement and the activities of the local conservationists are now being closely followed by the international community. In addition, it has become a main centre of attraction for children from around 250 schools in the area.

Kolavipalam beach is well known for Olive Ridley turtles, which are one of the smallest of all marine turtle species. Tourists visit here during the month of September to catch a glimpse of the turtles and their breeding activities. One of the specialties of this location is that it provides a safe breeding ground for the turtles. September to March is the breeding season for the turtles and during this time, they move closer to the shore for laying eggs during late nights and early mornings.

Recent reports show that around 831 Olive Ridley species hatched at a palm grove here. They were later released into the sea by a group of nature lovers. Members of the ‘Theeram Nature Conservation Society’ collected over 1,200 eggs laid by 11 turtles in the area during the nesting season.

Recently, natives of Kolavipalam had taken initiatives to generate awareness among residents of the coastal belt and the fisher folk who interact with the turtles the most. Illegal sand mining around the estuary and plastic waste that has accumulated here also cause serious threats to the turtles. The Kerala Government is also putting more attention on preserving the natural breeding grounds here with a view to conserve the turtles.

Town:
Kolavipalam beach is very close to Payyoli beach, which is around 4 kms away from Kottakkal in Kozhikode district.
Airport:
Calicut (Kozhikode) Airport, is at Karipur (Malappuram district), 25km away from the city center. The Indian Airlines Office is in the Eroth Center on the Bank Road close to the Mavoor Junction. Indian Airlines flies daily to Bangalore, Mumbai, Chennai, Coimbatore and Madurai. Air India has flights to Mumbai and Sharjah. East West Airlines and Jet airways flies to Mumbai. Phone Number: 0493-2711314
Railway Station:
The Kozhikode railway station is located south of Ansari Park about 2km from the new bus stand on Mavoor Road. The city is connected to most of the main cities such as Cochin, Thiruvananthapuram,Chennai, Coimbatore, Mangalore, Bangalore, Mumbai, New Delhi, Calcutta etc. It will take twelve to eighteen hours to Chennai from Kozhikode and 24 hours to reach Mumbai via Konkan railway. Trains to Mangalore from Kozhikode (Calicut) takes 5 hours, Ernakulam 4.5 hr, Thiruvananthapuram 9.5-10hr. Phone number: 0495-2701234
District:
Kozhikode
Longitude:
11.666053
Latitude:
75.617770