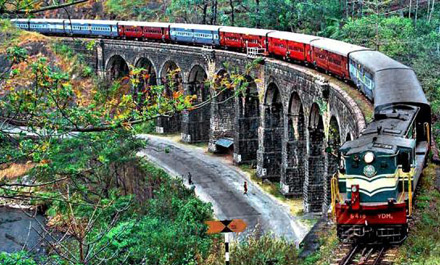 Travelling by Train to Kerala

Indian Railways operates several trains to and from Kerala. More than 300 plus trains connect Kerala to all parts of India, including long-haul direct train services to cities like Delhi and Mumbai. Trivandrum Rajadhani, Ernakulam Durnoto, Kerala Express and Netravati Express are some of the most popular trains connect key cities across India.

Log on to the Indian Railways booking site [6] to book tickets online or you can walk up to any railway station to book tickets between any two destinations in India. Smart Phone/Tablets can view details via any apps

Be aware that trains are the most popular method of transport and almost all trains in Kerala originate or terminate in Thiruvananthapuram or Kochi, and are usually heavily booked. Buy your tickets as early as possible. Another option is using Tatkal. You pay almost double, but have a chance of getting a seat. Tatkal is an emergency service, hence its booking is open just 24 hours before departure. Some travel agents have authorized booking quotas for certain trains.

Recently, the luxury tourist train The Golden Chariot has introduced a South Indian Rail Tour, which includes many parts of Kerala. This is a good option for those who want to visit the South Indian states on as tight schedule. The train starts from Bangalore and covers Chennai, Pondicherry, Trichy, Madurai, Trivandrum, Alapuzha, Kochi and back to Bangalore. The 7 night/8 day package tour, costs US$3,000-7,000 depending upon the class taken.

Trains are good for long distance travel within the state. Most trains are long distance trains with stops at many of Kerala’s stations. Majority of trains enter into Kerala from Tamil Nadu on east side and Shornur being the major junction that divides rail line into Northern branch and Southern branch. Trains on Konkan route enters from Northern side of Kerala reach use Shornur to branch either eastward or southward. Trains on south route is one main line untill Ernakulam where it branches to Kottayam Line and Alleppey line and runs parallel to each other as Vembanadu Lake comes inbetween these places. Both the lines merges back at Kayamkulam and further proceed southward as one major line to Trivandrum and further southward to Kanya Kumari.

Express trains are relatively faster, as they stop only at major stations and gets priority in event of crossing. Passenger trains stops at all stations in a route and can be held-up in event of an express train crossing, thus takes longer time. However latter is good option, if one needs to align at small village or town stations, not catered by express trains.

Railways have introduced MEMU services, between Kochi-Thrissur-Palakkad and Kochi-Kollam sector, similar to Mumbai’s Local trains, connecting all stations (small and big) on route, at increased speed.