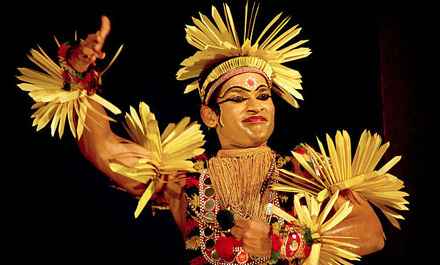 The word ‘Thullal’ means ‘Caper’ or ‘to leap or jump about playfully’. This art form emerged in the eighteenth century. A solo performance combining both dance and recitation, thullal is the explication of a tale – normally drawn from the puranas, narrated in verse. Kunchan Nambiar, renowned poet of the eighteenth century, first introduced this art form. Unlike Kathakali and Koodiyattom, the humorous and satiric mode of presentation and the use of simple Malayalam language made thullal very popular among the ordinary people.
Thullal Make-up

The make up, though simple, is very much similar to that of Kathakali. The face is painted with yellow arsenic mixed with blue. The eyes are blackened and lips reddened. The full painting of the face is retained for the expressive advantage. The dancer wears a breast-plate adorned with golden pearls, necklaces and colourful tassels. The white waist clothes resemble skirts. The head-gear is small, made of light wood, studded with bright stones and decorated with golden paper. The bracelets, amulets and waistlets are almost the same as in Kathakali.
Thullal Music and Orchestration

A solo performance, thullal is a tale narrated in verse. The thullal performer sings and he is supported by another singer who repeats the verses and is accompanied by an orchestra of mridangam, harmonium and cymbals. The performer through the classical acting techniques, portrays the various characters in an episode and does the narration.

Three forms of thullal – Ottan Thullal, Parayan Thullal and Seethankan Thullal, evolved in course of time. The three forms are differentiated on the basis of make-up, styles of narrative singing, rhythms of dancing and foot work. Of the three Ottan Thullal is the most popular.

Kunchan Nambiar, the founder and a major exponent of this dance form, tried to bring out through his performance the social conditions of his time, criticism against the malignant tendencies of the age and sarcasm against the wealthy and the aristocrats. Unlike Kathakali and Koodiyattom which could be appreciated only by the elite of the society, this performing art was able to communicate directly with the common people. Usually performed during festivals in the temple premises, thullal did not require a stage or any other formal arrangements.

Realistic acting and the perfect blend of humor, satire and music establishes an easy rapport between the performer and beholder. Thullal is yet another example of Kerala’s cultural and artistic heritage.