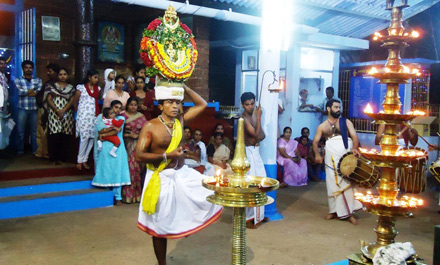 North Kerala has many rich art traditions, of which “Thitambu Nritham” is one. It is mainly performed by Namboothiris of this part of Kerala, and rarely other Braahmanan communities, say for example, Embranthiris. Late Vethiramana Sreedharan Namboodiri could easily be called the “Father of Thitambu Nritham”. Luckily this ritualistic art form has not died out with his withdrawal from the stage. Experts in this field like sri Matamana Sankaran Embranthiri and his disciple Brahmasree Puthumana Govindan Namboothiri are carrying on the great tradition in the north.

Thitambu Nrityam is pure dance, completely absorbed in, and regulated by, rhythm (Thaalam) which is “Layam”. Surprisingly, it has not been included among the temple arts of Kerala, though connoisseurs admit that this is an art, and a ritualistic one. As the dancer comes out carrying the replica of the idol on his head, the “Maaraar” (hereditary drummer in temples) makes the characteristic drumming when Thaanthric rites are performed.The word “Thitambu” suggests the direct manifestation of the deity. Idols being carried on top of elephants during festivals as also replicas beings held on shoulders while dancing to the rhythm of percussion instruments are a common sight in Kerala. But, dancing with the replicas on the heads, is a unique feature in the North. The origin of Thitambu Nritham cannot be easily traced. Some Braahmanans who had migrated to the North of Kerala at the time of Chirakkal Raja may have introduced this dance from Karnataka where a form of “Nritham” called “Darsana Bali” was in vogue.

Replicas are made of bamboo with which a beautiful frame with intricate designs is created. The priestly dancer, clad in the traditional style after performing the usual rituals, comes out of the sanctorum, and standing under the flag, holds aloft the replica weighing about 10 kg-30 kg on his head and starts the divine dance.The dance begins with “Kotti Urayikkal” (drumming to make the dancer possessed). The drumming in different Thaalams accompanied by scintillating music coaxes the performer to dance to each rhythm, creating a holy atmosphere. Each circumlocution is regulated by a different Thaalam. Thitambu Nritham has undergone some changes in accordance with the trend of the times,. The changes are in the Thaalams, though the basic one remains unchanged. The innovation adds to the novelty and variety of this art.