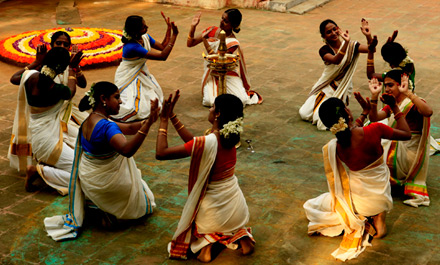 Thiruvathirakali, also known as Kaikottikkali, is a very popular group dance of Kerala. Thiruvathirakali is performed by the women of Hindu community, often during festive seasons like Onam and the Thiruvathira day in the Malayalam month of Dhanu (December- January). Performed by maids in order to attain everlasting marital bliss, Thiruvathirakali is a simple and gentle dance with the lasya element or the amorous charm predominating. The dance is performed around a nilavilakku (a ceremonial lamp) or a floral decoration especially during Onam. The dancers move in a circular pattern, accompanied by rhythmic clapping of the hands, to the tune of the Thiruvathira pattu. One of the performers sings the first line of the Thiruvathira pattu (song) while the rest repeat it in chorus. The songs are often narrations from the folk epics. . Today, Thiruvathirakali has become a popular dance form for all seasons and also a popular stage item.