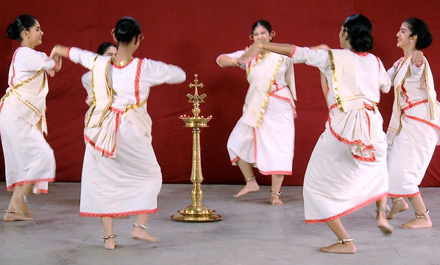 Margamkali is a very ancient and the most popular artistic performance prevalent among the Syrian Christians of Kerala. The word ‘margam’ means ‘path’ and it was meant for the propagation of Christian religious ideas. Margamkali is performed mainly by men on festive occasions, especially during the time of marriage. The dance is performed by 12 members moving in a circle around a lighted oil lamp. The oil lamp denotes Christ and the dancers symbolizes his disciples.
Margamkali dance

The songs of the Margamkali are composed in modern Malayalam. The dancers sing themselves while performing the dance. Unlike other dance forms of Kerala, Margamkali lacks musical accompaniment. The traditional text of the song is an elaboration of the activities and martyrdom of St. Thomas in Kerala. Later many other songs were also added to the original test.

Margamkali is often presented as a stage item today. It is also included as a competition item at the school and college level.