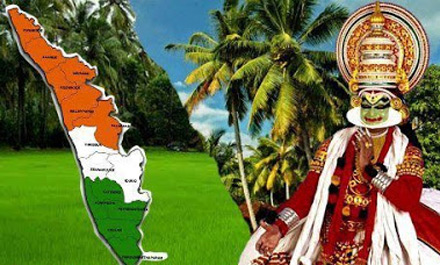 November 1, is celebrated as Kerala piravi or Kerala day. The state of Kerala with its present geographical area was constituted by the Government of India on this day in 1956. But the land of Kerala was known from a very early period. It was one of the great ancient Hindu kingdoms with the port city of Muziris (Kodungalloor near Kochi) as its capital and was already a renowned trade centre before the 3rd century B.C. Kollam, the hub of Chinese trade and Alappuzha were its other prominent seaports.

The land has been visited by traders from all over the world  the Portuguese were the first to arrive (Vasco da Gama reached Kozhikode in 1498), followed by the Dutch, the French and the English. In the ancient and medieval periods Malabar was the popular term used to delineate the Malayalam speaking areas of Kerala which comprised numerous petty states and kingdoms. By the close of the medieval period three prominent kingdoms emerged : Travancore, Kochi and Malabar.

They often waged war aganist one another and in 1757 a treaty was signed between Travancore and Kochi against the rulers of Kozhikode. By the late 19th century the British had captured most of the Indian provinces and become the most powerful colonial rulers.

A series of agitations for political rights and a popular Government begun in Travancore and Kochi early in this century and later joined by other provinces fetched independence in 1947 and the first popular Government took over from the British royal family. On July 1, 1949, Travancore and Kochi joined to form the unified TravancoreKochi state. But, even in the midst of geographic similarities and  solidarity of language, Kerala continued to be politically divided till the 1950s.