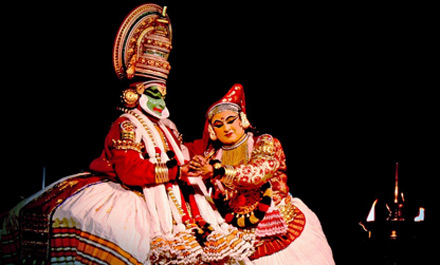 Kathakali performers use a luxuriant costume. Characters have their faces elaborately painted and they wear stylized costumes and tall headdresses. Great importance is laid on the Vesham or make-up which are of five types – Pacha, Kathi, Thadi, Kari and Minukku. The colours used in the make-up are determined by the nature of the characters. The costumes in Kathakali represents the three qualities of nature viz. satya (nobility), rajas (aggressiveness) and tamas (darkness) represented by pacha, kathi and thadi respectively. Pacha Vesham (Green) in Kathakali Dance

Kathi vesham portrays villainous characters. Characters of high birth who have an evil streak, such as the asura king Ravana, are also given a similar green make-up, slashed with red marks on the cheeks.
Thadi Vesham (Beard)

There are specialists in the green room who help the actors in their dressing. In fact, the makeup is so luxuriant that it is more like a mask than just make-up. These extraordinary costumes and make-up serve to raise the performers above the level of mere mortals that, the audiences are taken into an ecstatic world that the characters replicate onstage.
Kathakali Mudras – Symbols used in Kathakali

A Kathakali actor enacts his ideas through Mudras. There are 24 main mudras and numerous other lesser mudras and these can be again classified into ‘Samaana-mudras’ (one mudra symbolizing two entities) or misra-mudras (both the hands are used to show these mudras).
Kathakali Music and Orchestration

The Kathakali music provides a perfect background to the performance. Chenda, maddalam, chengila and elathalam are the four instruments used to provide the instrumental background (melam) for kathakali. Normally, two singers provide the vocal accompaniment. The style of singing particular to Kathakali is called Sopana sangeetham (Sopana Music). Of the two singers, the first singer (pinnani) keeps the steady beat of the thala (rhythmic pattern) by using the chengila (gongs), made of bell metal.
Painted face of a kathakali performer

Kathakali which symbolizes the visual art of Kerala has now developed to be qualified as a universal art. The main reason for its appeal is its attractiveness gained by the perfect blending of numerous varieties of fine arts.