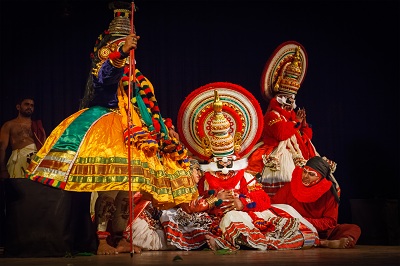 The lyrics of Kathakali music is generally sung through the 2 vocalists. The drums of two different varieties are usually used within the orchestra such as Chenda and Maddalam. The orchestra also includes Chengila, when the vocalist plays the instrument he bangs on the huge metal bell and Cymbals or Iiathalam are usually played through the other artists.

Music in Kathakali, which is of the “margi” type, follows the classical Ragamala code with the characteristic psychosis and time-elements and represents the purest form of South Indian Music or the Carnatic music. In fact, this form of purest music has almost become extinct in the present days.

A general and vigorous rhythm dominates the entire performance, and the sharp plastic movements of the body that is Anga Abhinaya and the different gestures (Hasta Abhinaya) enormously help the eloquent and perfect expressions of the various emotions, the Nava Rasas or the nine classical sentiments including Shringara, Vira, Karuna, Adbhuta, Raudra, Hashya, Bhyanaka, Bibhatsa and Shanta both in their elemental intensity and complex reactions to each other or the chemistry of feeling as the expert psychologist would put it. The emotional effect of the Kathakali is superb. There are more than five thousand Kathakali padams or songs, but the most popular songs are by the Titans of Kathakali music namely Kottayath Tampuran, Unnaayi Varier and Irayimman Tampi.

On the stage the music in Kathakali comprises the stentorian and melodious voices of a couple of singers accompanied by the clinking of the cymbals and the jingling of the Chengala in harmony with the booming of the drums. The leading singer has a song and the secondary singer a pair of cymbals to mark time. Strokes made on the gong with a stick keep time for the actors. The drummers emphasise each gesture and keep rhythm for the singers. The measures steps and poses of the actors are guided by the time beats on the drum.The conclusion or full stop to every conversation is marked by a Kalasom that is measured steps and poses controlled by the time beats on the drum. Every rhythm is definitely correlated with a particular mood and produces its characteristics and thrilling effect with precise calculation. This rhythm is more than art; it is a powerful manifestation of the all embracing rhythm of life, love, battle, romance, death, growth and decay. The variety of sounds which the drummers produce with the aid of their hands and the tiny stick is marvellous.

Two drums called Maddalam and Chenda are used. The Maddalam is fixed to the waist of the artiste with a cotton belt and remains in a horizontal position. The Chenda is fastened in a vertical position. The demonically clever and incessant drumming that shakes up the hearers assumes an entire gamut of rhythm. Of late, Edakka, a percussion instrument is also used when the female characters are on the stage and then the Chenda not used. The music of the Kathakali is a perfect combination of Raaga, Tala and Swara and Bhava. Kathakali orchestral group stand facing the audience.

Kathakali music has attained a high level of perfection. The raagas of the songs have been carefully selected to suggest the relevant emotional nuance and dramatic content. The synthesis of imagery and melody is a perfect achievement. Sixty different raagas and six talas are used with supreme evocative quality by the accomplished musicians. The movement of the actor is exquisite and never obtrudes itself beyond the meaning of dance, delicately soft when necessary and extremely virile and tense at other times. The closest and most harmonious co-operation is necessary between the three artistes the dancer, the singer and the drummer to render a performance in the Kathakali dance a success. The colour effect of the triangular harmony between the Geetham, Nritham and Vadyam is supremely enchanting.