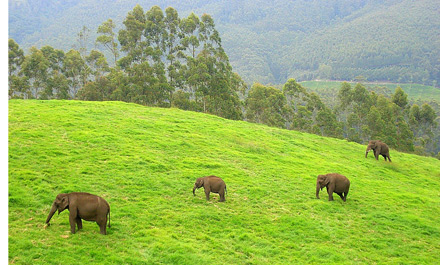 Elephants in Kerala are often referred to as the “sons of the sahya”. As the State Animal, the elephant is featured on the emblem of the Government of Kerala state, taken from the Royal Arms of both Travancore and Cochin.

Most of the Hindu temples in Kerala own elephants, the majority of which are donated by devotees. The famous Guruvayur temple has more than 60 captive elephants. The world’s only Elephant Palace is constructed in Punnattur Kotta, 3 km from the Guruvayur temple, to house the temple’s elephants. A famous elephant, named Guruvayur Kesavan, belonged to this temple.

Almost all of the local festivals in Kerala include at least one richly caparisoned elephant. Elephants carry the deity during annual festival processions and ceremonial circumnambulations in the Hindu temples. The temple elephants are decorated with gold plated caparisons (“nettipattam”), bells, and necklaces. People mounted on the elephants hold tinselled silk parasols (“muttukuda”) up high, swaying white tufts (“vencamaram”) and peacock feather fans (“alavattam”) to the rhythm of the orchestra. Seventeen elephants are engaged for the daily ceremonial rounds to the accomplishment of Pancari Melam in Kudalmanikyam temple. The headgear of seven of these elephants is made of pure gold and rest of pure silver, which is unique to this temple.