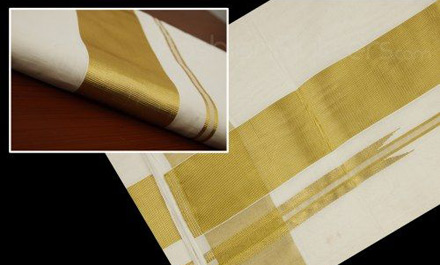 traditional kerala male dress Men were dressed in a hand-woven cotton cloth, called moondoo, and wore sandal pastes on their chests and brows. When going outside, they threw a smaller cloth over their shoulders.

Even now, men adopt the same style when at home. The hot climate makes this the most comfortable dress. On going out, however, they don a shirt, and the trouser replaces the moondoo in many cases.

Women of three or four generations ago also followed a similar pattern. For the last few generations, Hindu women of Kerala had adopted the practice of wearing a blouse and a second cloth over the blouse.

Both men and women preferred white dresses. The moondoos had gold (kasavoo) borders for wearing on special occasions, as seen in the pic right.

Muslim men wore a shirt-like apparel and a Muslim-style cap, in addition to the moondoo. The moondoo itself was worn in a style different from Hindus.

Muslim women wore a full-sleeve blouse, typically made of embroidered cloth, a special kind of moondoo and a cloth to cover their heads.

Men wore a white moondoo and sometimes, a white shirt-like apparel. Women also wore white, a special kind of blouse and moondoo that was worn in a special way. One edge of the moondoo was folded fan-like into multiple folds and this section was hung at the back.
modern sari

These days, the traditional styles are disappearing among most people. Women of all communities wear the sari, or the north-Indian style Churidar. Men have taken to shirts and trousers, imitating western fashion (and also finding that these are much more suited to the modern, diverse workplaces and considerable travel).

At home, however, you would find both men and women reverting to the more traditional styles, to cope with the hot climate and humidity.