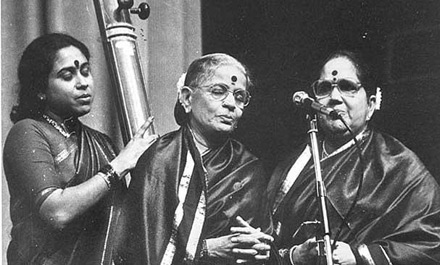 Carnatic music is considered one of the oldest systems of music in the world. Carnatic music is a very complex system of music that requires much thought, both artistically and technically. The basis of Carnatic music is the system of ragas (melodic scales) and talas (rhythmic cycles). There are seven rhythmic cycles and 72 fundamental ragas. All other ragas are considered to have originated from these. An elaborate pattern exists for identifying these scales, known as the 72 Melakarta Raagas. Tyagaraja, Muthuswami Dikshitar and Shyama Shastri, the three saint composers of the 19th century, have composed thousands of krithis that remain fresh among musicians and rasikas. The most important specialty of Karnatic music is its highly devotional element. The concept of the compositions are set entirely against a devotional outline. The notes of Carnatic music is “sa-ri-gaa-ma-pa-da-ni”. These are abbreviations of the real names of swaras which are Shadjam, Rishabham, Gandharam, Madhyamam, Panchamam, Dhaivatam and Nishaadam.

carnatic music sri krishnaEach note of the pattern (the swaraa) will have up to three varieties. The only exceptions for this are the two base notes shadjam and panchamam, sa & pa which have only one form, and madhyamam, the middle swara, which has only two notes. Spirituality has always been the prominent content of Carnatic music. The beautiful blending of the beauty and devotional element has made it extraordinary and divine. The basic idea behind indian music compositions has been to see and seek the ultimate brahman or God. In fact, it has been told in Hindu scriptures that the easiest and best way to attain salvation is to sing the greatness of the Divine power. In Hindu scriptures, music and God have always been depicted together. Many deities have their own musical instruments and are all portrayed as lovers of music. Lord Siva or rudra is the embodiment of Nada (cosmic music) which is the first form of music.

Lord Krishna, the first of flautists, indicates his musical inclinations by the fact that he is the Sama Veda among the Vedas. While Lord Siva is the embodiment of Nada (cosmic music) and Tandava (cosmic dance),Goddess Parvathi is seen as the embodiment of Lasya, the feminine quality.

carnatic music muralsGoddess Saraswati, the source of wisdom is always associated with the Veena (known as Vipanchi, or vina a stringed musical instrument). Goddess Lakshmi, the source of wealth revels in music while Lord Vishnu, her consort, plays on the percussion. Among the saints as well, Narada and tumburu are found as Vainika-Gayaka (experts in music and Vina). Nandi, the holy bull of Siva, is the master of Laya. Demi-Gods like Yakshas, Gandharvas and Kinnaras are all proficient in music and musical instruments. In Hindu scriptures, music is known as Gandharva Vidyaa. Hanuman was proficient in the instrument Hanumad Veena and this is the first form of the present day Chitraveena.

The growth and development of Carnatic music through the centuries is a testimony to the greatness of the Indian mind. It needs to be taken to the international arena parallel to any other classical art form. This can be achieved if we understand it in the right perspective and do not lose it to religion, for this mission we have this music website. Carnatic music, the representation of a rich cultural heritage of south India, the essence of spirituality evolved out of the heart and brain of the pious ones and the gurus of the past. Thus carnatic music of South India is the synonym to salvation and eternity. The Nada Brahma – God incarnated in a sonic form to save humans from birth and rebirths.