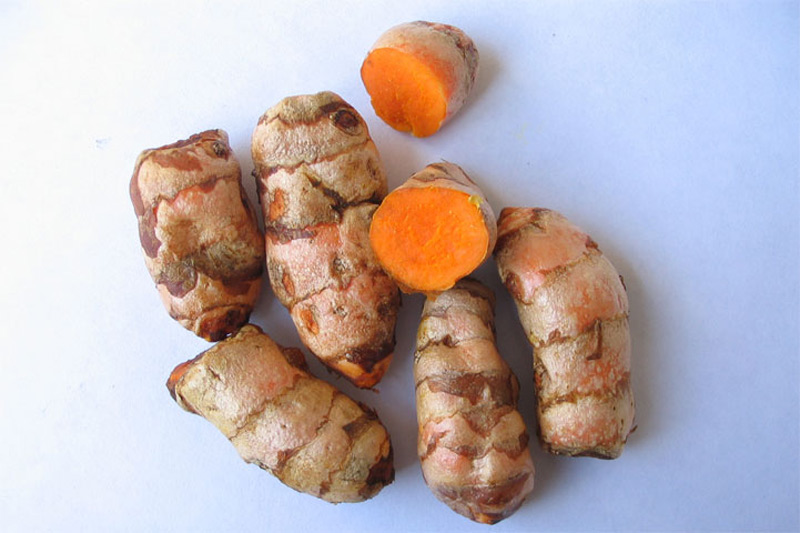 Turmeric (Curcuma longa, also called tumeric or kunyit in some Asian countries[1]) is a spice commonly used in curries and other South Asian cuisine. Its active ingredient is curcumin. It is a significant ingredient in most commercial curry powders. Turmeric is also used to give a yellow color to some prepared mustards, canned chicken broth, and other foods (often as a much cheaper replacement for saffron). It makes a poor fabric dye as it is not very lightfast (the degree to which a dye resists fading due to light exposure). Turmeric, a representative of plant genus Curcuma, is a member of the ginger family, Zingiberaceae. In Ayurvedic medicine, turmeric is thought to have many healthful properties and many in India use it as a readily available antiseptic for cuts and burns. It is taken in some Asian countries as a dietary supplement, which allegedly helps with stomach problems and other ailments. It is popular as a tea in Okinawa, Japan. It is currently being investigated for possible benefits in Alzheimer’s disease, cancer and liver disorders. Sangli, a town in the southern part of the Indian state of Maharashtra, is the largest and most important trading centre for turmeric in Asia or perhaps in the entire world.

Turmeric is a main ingredient of curry powder. The rhizomes are cooked, dried and then ground to produce the strongly coloured, aromatic powder

As well as being a culinary spice, turmeric is a well known dye plant in South Asia. Its colour varies depending on how it is processed. If mixed with alkaline fluids it turns bright red, but when mixed with acid it produces yellow.

Turmeric is only known as a domesticated plant and not found in the wild. It originated from South and Southeast Asia, and may have been first used as a dye before it became a popular spice.

Turmeric has traditionally been used to counteract many conditions including the ageing process in Ayurvedic medicine.

The dried rhizome of a herbaceous plant, TURMERIC is closely related to ginger. The spice is also sometimes called ‘Indian saffron’ thanks to its brilliant yellow colour. Indian turmeric has been known to the world since ancient times. Several unique properties of Indian turmeric make it the ideal choice as a food flavour, an effective ingredient in medicines and cosmetics, and as a natural colourant. With its rich curcumin content, which imparts the distinctive yellow colour, and other inherent qualities, Indian turmeric is considered the best in the world. India is today the largest exporter of turmeric to discerning countries like the Middle East, the UK, USA and Japan. Some of the well-accepted varieties are: ‘Alleppey Finger’ and ‘Erode turmeric’ (from Tamil Nadu), ‘Rajapore’ and ‘Sangli turmeric’ (from Maharashtra) and ‘Nizamabad Bulb’ (from Andhra Pradesh). India also exports turmeric in powder form and as oleoresin.