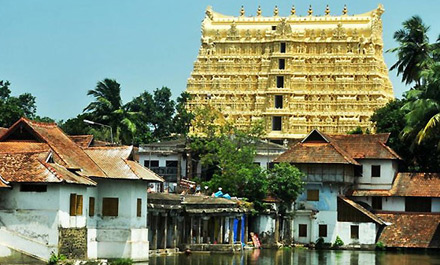 Hindus, who make up over half the population of the state, form the largest religious community in Kerala. Like elsewhere, Hindus worship many divinities (gods and goddesses), the most important being – Brahma, Vishnu and Maheshwara (Siva) – the creator, the preservator and destroyer. Hinduism has a number of sacred writings, such as the Vedas, Upanishads, and Puranas which outline how its followers should conduct their lives.

With the arrival of the Aryans, caste system evolved. The caste system as applied to Hindus determines their way of life, often even their occupations. Hindus offer daily worship to family deities at the household shrine. Daily puja in a Hindu temple is conducted by the chief priest and his helpers. Even today snake worship is done in many temples of Kerala.

In 1936, Travancore opened its Hindu temples to all Hindu worshippers regardless of their caste (social status). The city of Cochin followed Travancore’s example in 1948. Temples remain closed to non-Hindus. Sabarimala Temple is an improtant pilgrim centre.

Except Malappuram district, where the Muslims are a majority, Hindus constitute the majority in all other districts. The population of Hindus declined by 1.48 percentage points in the State since the last Census in 1991.