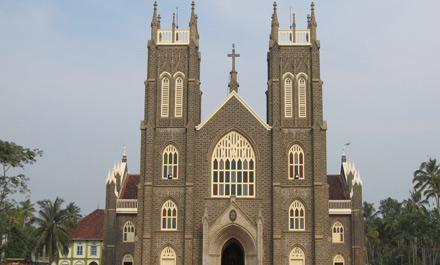 St. Thomas, the Apostle of Jesus Christ is considered the father of Christianity in India. He landed at Maliankara, near Cranganore (now Kodungallur) in 52 A.D. He preached Christianity first among the Jews and then converted twelve Brahmin families from whom the Syrian Christians trace their genealogy. He also founded seven churches at various places in Kerala. Today, Christians constitute 19% of the total population of the state.

With the arrival of colonialism by the 17th century, many European missionaries reached Kerala. The Church Mission Society of London (CMS) made many converts from among the untouchables and the Syrian Christians. Kerala is greatly indebted to these missionaries for their role in improving the living standard of it’s people and relieving them from many social evils.

The Christians of Kerala today are divided into several branches:

Of these, the Marthoma churches are comparatively of younger origin. They are considered as Reformers Church as they are the exponents of introducing the vernacular language in the liturgy. Apart from these major churches, there are also a number of minor Churches and Missions like the Pentecostal churches, Salvation Army, Seventh-Day Adventists etc…

A number of schools, colleges, hospitals and other charitable institutions like old age homes, orphanages etc… are run by these churches and other Christian organisations throughout the state. Malayattoor Church is an improtant pilgrim centre.