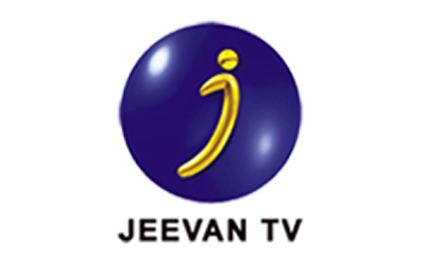 Jeevan Television is a secular news and entertainment Malayalam television channel. Its headquarters is at Palarivattom, Kochi, India. Jeevan TV is the result of initiative and investment from people from various walks of life. Jeevan TV first aired its news and entertainment programs in the year 2002. The channel was re-launched in the year 2003 with its secular values and new logo. There was a misinterpretation about the channel as a Catholic channel and promoted by the church. The relaunch of the channel with new logo helped to change this view. There was a tour of the logo throughout Kerala, named “Jeevan Jyothi Yathra”, led by eminent personalities, celebrities, politicians and various religious leaders from different religious groups, prior to the Grand Launch Ceremony held at Jawaharlal Nehru International Stadium Kochi. The Launch of new Logo was the Mile stone of this channel to show the public, that this is not a religious channel run by the church, but its a secular channel which holds good humanitarian values in all its programs.

Jeevan TV was a trend setter for so many aspects in the history of Malayalam Television Entertainment. Jeevan TV also aired the first English news on a Malayalam channel. The channel is promoted as a “Complete Family Channel”. Its slogan is “Add Jeevan to your Life”. It is also marketed as an infotainment channel.

Jeevan TV telecasts Multi-Dimensional programs without losing its core values. Various Entertainment programs include, movies, Comedy, Current Affairs, culinary, travelogue, seasonal and sponsored programs. The news of Jeevan TV is popular due to its un biased stand on facts. Jeevan News is one of the most popular news programs in Malayalam Language. Its award winning current affairs program Kazhchappathippu is one of the most viewed and discussed current affairs program. Vidukshakan is a satire program referring to day to day happenings in the political and social world of Kerala. Gulf News and Harithakeralam are other popular programs of this channel.