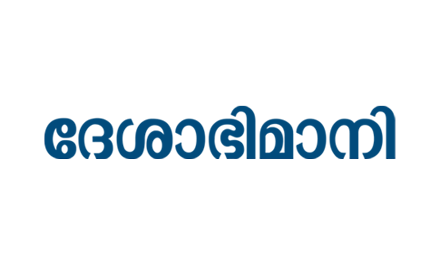 Desabhimani is a Malayalam newspaper and the organ of the Kerala State Committee of the Communist Party of India (Marxist). Started as a weekly in Kozhikode on September 6, 1942 and converted to a daily in 1946. Deshabhimani now has nine different printing centres: Kozhikode, Kochi, Thiruvananthapuram, Kannur, Kottayam, Trichur,Malappuram, Banglore and Bahrin. According to the National Readership Survey of 1995, Desabhimani was the third largest newspaper in Kerala. At present, V. V. Dakshinamoorthi, secretariat member of the CPI (M) is the Chief Editor of the paper and E.P. Jayarajan, CPI(M) central committee member, the General Manager.

It is the third most widely read newspaper daily in Kerala, after Malayala Manorama and Mathrubhumi.

Deshabhimani has a predecessor, Prabhatham (which means ‘Dawn’). It was started in 1935 and was the manifesto of the socialist group in the Indian National Congress. It was in 1942, through the efforts of eminent leaders like A K Gopalan and E M S Namboodiripad(who in fact donated all of his ancestral property for raising funds for the paper) Deshabhimani started and became the voice of the Communist Party of India (later became Communist Party of India (Marxist)). Various personalities like E.M.S. Namboodiripad, V T Induchudan, K P R Gopalan and V. S. Achuthanandan, have served as the chief editors of Deshabhimani. So many notable Journalists of South India work with Deshabhimani. Journalists who have worked with Deshabhimani include P Govindapillai, Ezhacheri Ramachandran, Prabha Varma.