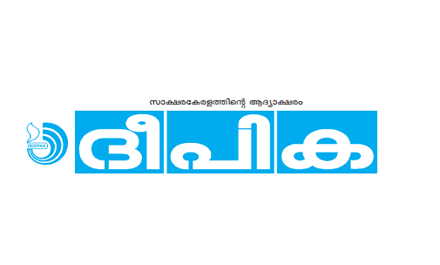 Deepika, a Malayalam language newspaper, is one of the oldest newspapers published in India. Started in 1887, it is the oldest Malayalam newspaper now in circulation. Deepika publishes editions from Kottayam, Kochi, Kannur, Thrissur, Thiruvananthapuram and Kozhikode. It was controlled by the Syro Malabar Church of Kerala from its inception till 1989. In August 1989, the Deepika and its sister publications came under the ownership of Rashtra Deepika Ltd., a public limited company. The readership of the newspaper is drawn mainly from the Syro Malabar Catholic laity. Msgr.Mathew M.Chalil is the Chairman Managing Director and Fr. Alexander Paikada C.M.I is the Chief Editor of the newspaper.

Deepika has an illustrious history of over a century. It was first published by a Syrian Catholic priest, Nidhirikkal Manikkathanar, or Father Emmanuel Nidhiri, or Nidhiry Mani Kathanar, under the masthead Nasrani Deepika. (Nasrani in Malayalam means a Syrian Christian). The first issue came out on 1887 April 15, which coincided with Vishu (the spring equinox festival according to Kerala tradition). The word “Deepika” in Malayalam means “lamp.” Printing was on a crude handmade wooden press.

As its first name denotes, Deepika began as a paper of Syro Malabar Nasranis or Catholics of Kerala’s Syran tradition. From its very inception it was run by Carmelites of Mary Immaculate (CMI), a religious order within the Syro-Malabar Catholic Church. In 1989 its control was transferred to a Public Limited Company, “Rashtra Deepika Ltd”.

Deepika has a long tradition of going for bold innovations. It introduced many changes in Malayalam journalism. The following is but a sample of its impressive achievements:-