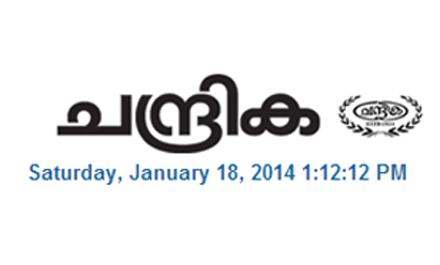 Chandrika is a Malayalam newspaper run by the Indian Union Muslim League, Kerala. It is published from Kozhikode, Kannur, Malappuram, Kochi, Trivandrum, Doha, Dubai, Riyadh and Jeddah and was the first attempt to have a newspaper from Malabar Muslims to support the political party. It was established in the 1934 at Thalassery and it has celebrated its Platinum Jubilee in January 2011. Chandrika started publishing from Kozhikode during 1938-1939.

Former Kerala Chief Minister Mr. C.H. Mohammed Koya was once the chief editor of Chandrika and he had put in a lot of effort to modernize the newspaper to the one which we see today. Chandrika weekly, Mahila chandrika, sports chandrika and arogya chandrika are published by the Chandrika Family.