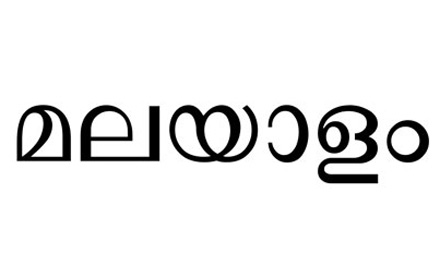 Kerala is one first Indian state with a literacy level of 100%. Both Malayalam and English are widely taught Language in the state. Malayalam is, however, the regional and official Language of the state. Malayalam is also one of the official Language of India. It is essentially a Dravidian Language but historical events have influenced the growth and vocabulary of Malayalam.
The original Dravidian settlers commonly used Tamil as their Language. Tamil was the court Language in the Chera regime too. Around the 10th century, Malayalam started to develop its own distinctive character. Due to the common grammar and vocabulary, many scholars feel Malayalam is like an offspring of Tamil; however Malayalam has a rich modern literature and an independent written script (Kolezhethu). With the settling of the Aryans, Sanskrit put the growth of Malayalam on a bane. The Brahmin Namboodiris exclusively used Sanskrit but this incidence, instead of threatening the existence of Malayalam enriched it instead. The local Language absorbed the words from Sanskrit and used them with a Malayali addition or alteration. Thus evolved the Mani Pravlam or Malayalam heavily spiked with usage of Sanskrit words.

Current day Malayalam has about 53 letters of which 20 are long/short vowels and the rest are consonants. Since 1981, the script was modified to adapt Malayalam to the use of keyboard and hence there are currently only 90 letters for a typeset.

Variations in the Language can be seen across the length and breadth of the state depending on social structure, geography and community. The Syriac Christians’ vocabulary is influenced by English, Syriac, Latin and Portuguese while the Muslim population talks Malayali with additions from Urdu, Arabic. Sanskrit influences the Brahmin lingo the most. Pali is another Language that has influenced the native tongue.
The other major Language spoken in the state and hence another big influence on Malayalam is English. The European association and the British rule have lent this characteristic to the state. The inhabitants of Pallakad and border regions speak Tamil and those of Northern Kerala are influenced by the Konkan and Marathi Language. The Language has 5 main dialects