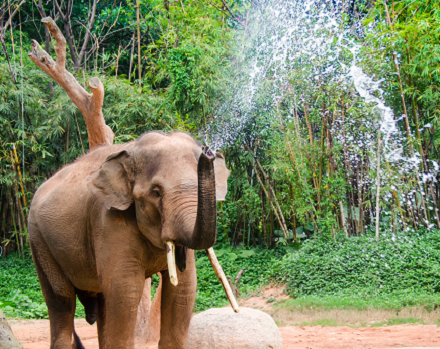 Most of Kerala, whose native habitat consists of wet evergreen rainforests at lower elevations and highland deciduous and semi-evergreenforests in the east, is subject to a humid tropical climate. however, significant variations in terrain and elevation have resulted in a land whose biodiversity registers as among the world’s most significant. Most of Kerala’s significantly biodiverse tracts of wilderness lie in the evergreen forests of its easternmost districts;[1] coastal Kerala (along with portions of the east) mostly lies under cultivation and is home to comparatively little wildlife. Despite this, Kerala contains 9,400 km² of natural forests. Out of the approximately 7,500 km² of non-plantationforest cover, there are wild regions of tropical wet evergreen and semi-evergreen forests (lower and middle elevations — 3,470 km²), tropical moist and dry deciduous forests (mid-elevations — 4,100 km² and 100 km², respectively), and montane subtropical and temperate(shola) forests (highest elevations — 100 km²). Such forests together cover 24% of Kerala’s landmass.  Kerala also hosts two of the world’s Ramsar Convention-listed wetlands: Lake Sasthamkotta and the Vembanad-Kol wetlands are noted as being wetlands of international importance. There are also numerous protected conservation areas, including 1455.4 km² of the vast Nilgiri Biosphere Reserve.