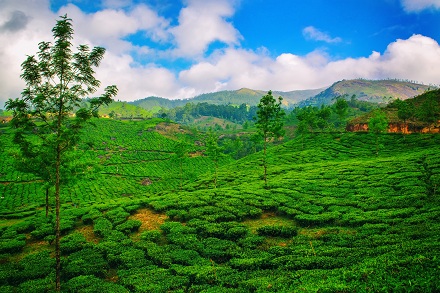 Eastern Kerala consists of land encroached upon by the Western Ghats; the region thus includes high mountains, gorges, and deep-cut valleys. The wildest lands are covered with dense forests, while other regions lie under tea and coffee plantations (established mainly in the 19th and 20th centuries) or other forms of cultivation.

Munnar, a popular hill station in Kerala with stunning lush tea
plantations. Munnar attracts tourists from all over the world because of its exquisite natural beauty. Munnar is located in the state of Kerala and was the popular summer destination of the British rulers. The British developed Munnar to cultivate tea plants. The climate of Munnar is mild and pleasant through out the year. The scenic beauty of Munnar combined with its tourist destinations makes it one of the hotspots when it comes to holiday destination.

Specialty of Munnar-  India’s first Tea Museum at Nallathanni Estate
to take a look at the history of tea production in Munnar.  You can
also visit Kundale Tea Plantation, nearby a lake, to witness the entire
tea making process.

Wayanad, a lush mountainous agricultural area of Kerala, also produces major amount of tea, in addition to coffee and spices. Most of the tea plantations in Kerala are located south of Kalpetta.

Some
of the popular hill stations in the region are Munnar, Vagamon,
Paithalmala, Wayanad, Nelliyampathi, Elapeedika, Peermade and Ponmudi. Read more about the famous hill stations in Kerala>>