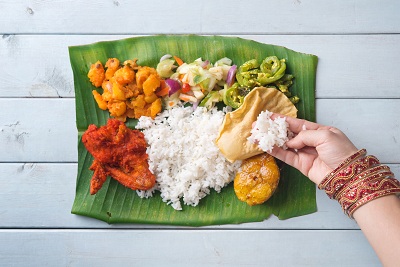 The food of Kerala is influenced by the culture and tradition of the region. Many of the cuisines have undergone changes in their way of preparation with the transition in time. The gourmets are in general spicy and include coconut as a prime ingredient. On a visit to Kerala one would find a variety of famous vegetarian and non-vegetarian dishes such as Vellarikka Kichadi, Paal Payasam, Avial, Dry Prawns with Cabbage, Kerala Parantha and Fish Curry.

The state of Kerala has a rich history that has witnessed many foreign cultures in the past. These cultures have not only left an impact on the history of the region but also on the preperation methods of food. Many dishes have been adopted from these and have been transformed according to the taste of the people of Kerala. One such example is the Malabar Mutton Biriyani.

The influence of the various cultures is also felt on the eating habits of the region. During the earlier days Kerala was divided into Travancore, Malabar, Kochi and North Malabar princely states. All these states had there own style of cooking which has been passed from generation to generation. The food of the Central Travancore region resembled that of the Christian community whereas the North Malabar region serves both vegetarian and non vegetarian foods. The presence of the Muslim rule has further influenced the culinary skills in preparing non-vegetarian items.

Kerala is also known for its spice plantations along with its rich tourist attractions in form of beaches, backwaters and hill stations. In the drive from Thekkady to Munnar, one can find nutmeg, tea, coffee, cocoa, rubber and many other spice estates. Hence, coconut, rice, tapioca, black pepper, red pepper, cloves, cinnamon, cardamom and ginger forms a part of the food. Curry leaves is also an important element that gives the distinctive aroma to the gourmet. With the advent of the foreign rules the state has also adapted to non-vegetarian items like mutton, fish and chicken apart from the regular vegetarian meals. Due to abundance of coconut trees, the food is rich with coconut. A pinchful of tamarind is used as the substitute for tomatoes.

Rice, coconut, dal and fish are the staple food of Kerala and it is generally prepared with the spices available in the state. Shrimps, crustaceans and prawns are also very popular.  The eating habits do change with the religions. In general, the Hindu Brahmins are strictly vegetarian and do not eat meat products in nature as the Muslims are forbidden to eat pork. The traditional Kerala style involves food being served on banana leaf and eaten by hand. The diet also varies according to the time of eating.

In breakfast people generally have puttu, sambar, dosa, idli, upma and kadal. These items are prepared from rice and dal. Coconut, curry leaves and other spices are also used while preparing it. In lunch and dinner the locals prefer to have rice or its other varieties. The rice is taken with sambar or other preparations that may be veg or non-veg. The people also prefer Choru which is a form of rice that is prepared by boiling it with rice husks. Fish curry is an important part of the diet for those who are non-vegetarian. The other dishes are chicken fry, mutton curry and also prawn items. Some of the other cuisines that form a part of the diet are rasam, olan and buttermilk.  Thoran is a coconut-based dish of dry fish which can infuse delight into the meals.

With changing time wheat has also becoming an important inclusion in the diet. Chappatis (Indian bread) or parathas such as Kerala Parantha (similar to chappatis but fried in oil) are now preffered along with rice. Pickle, curd and dessert are also now a part of the meals in this southern state of India. One of the desserts that are prepared largely is Payasam. Rice, dal and even banana may be added to the payasam while preparing it. Even after all these, a traditional Kerala meal is incomplete without round, crunchy, rice flakes, pickles and chutneys. Kerala is well-known for its traditional home-made snacks such as rice flour cookies and banana chips, which can be served with the evening coffee.

There are plenty of non-veg cuisines that one can find & experience while on a trip to Kerala, India. From fish to mutton, the food of Kerala offers unlimited options. These food items are generally spicy and would tickle the taste buds simply with the aroma.

Chicken Curry – The chicken curry is one of the popular cuisines of Kerala. The ingredients of this food item include spices like chilli powder, coriander powder, green chillies, ginger, onion, garlic and also garam masala. The chicken is cooked along with these spices and is normally taken with rice. Sometimes, vegetables like potatoes and tomatoes are also added in it.

Fish Curry – The fish curry of Kerala is another dish that may be tried during the visit to Kerala. This cuisine is cooked in coconut oil and is kept for around 10-12 hours before being served. There is not much restriction on the type of fish used and may also go for prawns instead. The spices used for preperation of this delicacy are turmeric powder, chilli powder and fenugreek powder. Along with these mustard seeds, garlic, ginger, salt and curry leaves are also added. Later, tamarind is added to it to make it sour.

North Malabar Prawn Curry – Some of the key ingredients in the preperation of north malabar prawn curry are green mango, green chilli, red chilli powder, curry leaves and coconut oil. This food item is served hot and it represents the traditional cooking style of Kerala. The curry leaves and coconut oil provides a particular taste to the food which cannot be found in any other part of India. The dish is prepared in earthen pot or vessel. The prawns are first cooked along with the green chillies, green mango pieces and water. Later, the spices are added and the dish is boiled.

The vegetarian cuisines of Kerala are generally not as spicy as the non-veg dishes. This helps the non-native people to enjoy the delicacies. Some of the popular vegetarian food are :

Sadya – Sadya is the traditional cuisine of Kerala and is served on a banana leaf. This vegetarian food item consists of rice and other side dishes. On special occasion it is served and forms an essential part of the tradition of Kerala. Few of the items served along with sadya are sambar, avial, thoran, kaalan, pappadam, kaya upperi and payasam.

Vellarikka Kichadi – Vellarikka Kichadi includes ingredients like curd, cucumber, green chillies, mustard seeds, grated coconut and curry leaves. The dish is ideal for the hot climatic condition and provides the much needed refreshment. The coconut, cumin seeds and the onions are mixed together. Later, it is mixed with cucumber (cooked in water mixed with salt and chillies). Once the whole preperation is cooled the curd is added to it.

Sambar – Sambar is a popular way of preparing lentils and is taken along with rice as well as other rice dishes like dosa, idli and also vada made from dal. Preperation of sambar includes lot of vegetables and is sour in taste. It is ideally suited for the hot & humid weather of Kerala and forms an important part of the meal. Some of the key ingredients used are red lentils, yellow lentils, brinjals, onions, cucumber, cluster beans, tamarind juice and curry leaves. All the vegetables and dals along with salt, turmeric and water are cooked in a pressure cooker. When it is cooked tamarind juice, asafoetida and samabar powder are added and is again cooked for a while. Later oil, curry leaves and red chillies are fried and added to it.

Paal Payasam – Payasam is eaten as a sweet dish in Kerala and is prepared during special occasions and celebrations. The main ingredients of this food item are milk, rice, sugar or jaggery and also cashews. The other items used are raisins, ghee and cardamom. The preparation is simple as compared to some of the other dishes. Before serving it is garnished with cashews and also raisins.