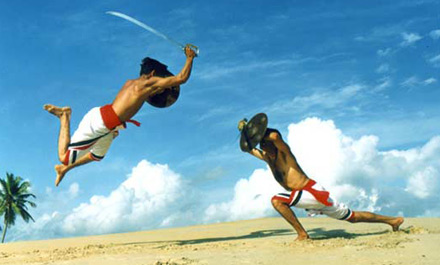 Kerala’s culture is mainly Dravidian in origin, deriving from a greater Tamil-heritage region known as Tamilakam. Later, Kerala’s culture was elaborated on through centuries of contact with overseas cultures. Native performing arts include koodiyattom, kathakali—from katha (“story”) and kali (“play”)—and its offshoot Kerala Natanam, koothu (akin to stand-up comedy), mohiniaattam (“dance of the enchantress”), thullal, padayani, and theyyam. Other arts are more religion- and tribal-themed. These include chavittu nadakom, oppana (originally from Malabar), which combines dance, rhythmic hand clapping, and ishal vocalisations. However, many of these art forms largely play to tourists or at youth festivals, and are not as popular among most ordinary Keralites, who look to more contemporary art and performance styles, including those employing mimicry and parody. Additionally, a substantial Malayalam film industry effectively competes against both Bollywood and Hollywood.

Several ancient ritualised arts are Keralite in origin; these include kalaripayattu (kalari (“place”, “threshing floor”, or “battlefield”) and payattu (“exercise” or “practice”)). Among the world’s oldest martial arts, oral tradition attributes kalaripayattu’s emergence to Parasurama. Other ritual arts include theyyam, poorakkali and Kuthiyottam.

Kuthiyottam is a ritualistic symbolic representation of human bali (homicide). Folklore exponents see this art form, with enchanting well–structured choreography and songs, as one among the rare Adi Dravida folklore traditions still preserved and practised in Central Kerala in accordance with the true tradition and environment. Typical to the Adi Dravida folk dances and songs, the movements and formations of dancers (clad in white thorthu and banyan) choreographed in Kuthiyottam are quick, peaks at a particular point and ends abruptly. The traditional songs also start in a stylish slow pace, then gain momentum and end abruptly.

Kuthiyotta Kalaris’, run by Kuthiyotta Ashans (Teachers or leaders), train the group to perform the dances and songs. Normally, the training starts about one to two months before the season. Young boys between 8 to 14 years are taught Kuthiyottam, a ritual dance in the house amidst a big social gathering before the portrait of the deity. Early in the morning on Bharani, after the feast and other rituals, the boys whose bodies are coiled with silver wires, one end of which is tied around his neck and an arecanut fixed on the tip of a knife held high over his head, are taken in procession to the temple with the accompaniment of beating of drums, music, ornamental umbrellas, and other classical folk art forms, and richly caparisoned elephants.

All through the way to the temple tender coconut water will be continually poured on his body. After the circumambulation the boys stands at a position facing the Sreekovil (Sanctum Sanctorum) and begins to dance. This ceremony ends with dragging the coil pierced to the skin whereby a few drops of blood comes out.

On this day just after midday the residents of the locality bring huge decorated effigies of Bhima panchalia, Hanuman and extremely beautiful tall chariots in wheeled platforms, and after having darshan the parties take up their respective position in the paddy fields lying east of the temple.

During the night, the image of Devi will be carried in procession to the effigies stationed in the paddy fields. On the next day these structures will be taken back. A big bazaar is also held at Chetikulangara as part of this festival. Kuthiyottam is the main vazipadu of the Chettikulangara temple, Mavelikkara.

In respect of Fine Arts, the State has an abounding tradition of both ancient and contemporary art and artists.The traditional Kerala murals are found in ancient temples, churches and palaces across the State. These paintings, mostly dating to between the 9th to 12th centuries AD, display a distinct style, and a colour code which is predominantly ochre and green.

Like the rest of India, religious diversity is very prominent in Kerala. The principal religions are Hinduism, Christianity, and Islam; Jainism, Judaism, Sikhism, and Buddhism have smaller followings. The state’s historic ties with the rest of the world have resulted in the state having many famous temples, churches, and mosques.

Recognising the potential of tourism in the diversity of religious faiths, related festivals and structures, the tourism department launched a “Pilgrimage tourism” project. Major pilgrim tourism attractions include Guruvayur, Sabarimala, Malayatoor, Paradesi Synagogue, St. Mary’s Forane (Martha Mariam) Church Kuravilangad built in 105 A.D, Attukal Pongala (which has the Guinness record for being the largest gathering of women in the planet), and Chettikulangara Bharani. Read More…