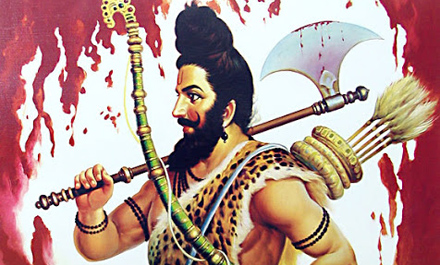 The history of Kerala, is as interesting and striking as its varied geographical features that adds an awe-inspiring beauty and thus this place becomes a land of versatile appeal. Kerala is the melting pot of many cultures and civilizations – native as well as foreign and hence consists of a rich heritage.

There is a very interesting mythological famous legend that mentions the origin of the land of Kerala – God’s own country.

The legend says that Warrior Sage -Parasuram, the 6th avatar of Lord Vishnu, the preserver of the universe, stood on a lofty cliff and ordered the violent sea to recede by throwing his warrior axe in the sea. The sea obeyed his commands and the land that egressed of the sea waters came to be known as Kerala, the land of abundance and affluence.

Early Inhabitants of Kerala -Nothing definitely can be said about the original, early inhabitants of Kerala as there are no evidences or records, however according to the Archaeologists; the early inhabitants of Kerala were the hunters and food gatherers of Negrito tribe. Then came the the Austriches or the Austric people who resembled the present-day Aborigines of Australia and indulged in snake worship. The Austric people were followed by the Dravidians who migrated from the Mediterranean region. The Dravidians drifted away southwards but left behind their substantial cultural contribution on the Aryans (Indo – Iranians) who brought Buddhism, Jainism and Hinduism along with them.

The Mauryan Contact -The first scripted history of Kerala is found the inscription of Ashoka the Great, the Mauryan Emperor (269-232 BC) who cited four independent territories in the south of his empire and Kerala was one of them. These four kingdoms were the Keralaputras, the Satiyaputras, the kingdom of Cholas and the kingdom of the Pandyas. Ashoka recorded Kerala as Keralaputra. Jainism was introduced in Kerala during the reign of Chandragupta Maurya and this fact is supported by the proof that some present day Hindu temples were originally Jain ones.

During the third century B.C, Asoka sent numerous monks to preach and spread Buddhism to different parts of India including South India and other parts of the world such as Burma, Sri Lanka and also to Persia and Greece. These Buddhist monks established their monasteries in Kerala.

The Sangam Age – The Sangam Age (1-500 AD) in Kerala is said to be the first enlightened age among the other periods of the past. The poets, poetesses and other writers of this period have left behind valuable accounts of the contemporary age including the cultural, economic, social and political aspects of the kingdoms of the South. Three political powers ruled the territories of the South which now represents present day Kerala during the Sangam Age. These were the Ezhimalas to the north, the Cheras in Central Kerala and the Ays in the south. Poems like Akananuru, Manimekhalai ,Purananuru and Silappathikaram were composed in this age.

Chera Kingdom – The kingdoms of the Cheras were located to the south of the great Mauryan Dynasty and Keralaputra and Cheraputra were first mentioned in the inscriptions of Ashoka the Great and later from the poems of the Sangam literature we come to know many details. The Chera dynasty was one of the ancient Tamil dynasties who reigned over south India from early times until the fifteenth century. Their kingdom extended over the Malabar Coast, Karur, Coimbatore and Salem Districts in South India, which now is a part of present day Kerala and Tamil Nadu. The first Chera ruler was Perumchottu Utiyan Cheralatan who founded the Chera dynasty. He was succeeded by his son Imayavaramban Nedum Cheralatan. However, the greatest ruler of the Chera Dynasty was Kadalpirakottiya Vel Kelu Kuttuvan, whose reference has been made in the great Tamil epic- Silappadigaram.

Kalabhra Interregnum – With the ending of the progressive Sangam Age that was beamed with the literary advance in South Indian literature, the light faded and Kerala underwent a dark phase that lasted almost for four centuries. This epoch is known as ‘Kalabhra Interregnum’ and has been referred as the Dark Age in thehistory of Kerala. The Kalabhra Kings created mayhem and disrupted the social and political order of the South Indian Peninsula by overthrowing and deracinating the Adhirajas of Chera, Chola and Pandya dynasties which were a part of present day Kerala and Tamil Nadu. These valorous Kalabhra Kings ruled with an upper hand, relentlessly for almost three hundred years from 300 AD to 600AD. The reign of Kalabhras of South India finally came to an end in the 8th Century AD when the Pallavas, Pandyas, Chalukyas and the Rashtrakutas extirpated them from South India.

The Second Chera Empire – After the reign of the Kalabhras, Kerala emerged from the dark age and came under the Second Chera Empire (800 – 1102 A.D)founded by Kulasekhara Alvar. The first Chera Empire waned in the 3rd century and was revived in the 9th century. It was only under the reign of the Kulasekhara kings that Kerala became an advanced civilization and a pre-eminent political power. The capital of this Chera Empire or Kulasekhara Dynasty, (known by the ancestral name of the kings) was Mahodyapuram- modern Kodangallur in Kerala. During this Kulasekhara era, the Quilon Calendar (Malayalam Calendar system) or Kolla Varsha was innovated and was issued on the25th of July, 825 A.D. Bhaskara Ravi I, Bhaskara Ravi II and Sthanu Ravi Varma, the successor of Rajasekhara Varman ,were the prominent rulers of this period. The Second Chera Age of the Kulasekharas was called the “Golden Age” of Kerala.

Rajasekhara Varman Rule – Rajasekhara Varman (AD820 – 844), the successor of Kulasekhara Alvar who founded the Second Chera Empire, pioneered the Kollam Era in 825. He is also famous for issuing the Vazhappali Inscription which forms the first epigraphical record of the Second Chera Kingdom. He was succeeded by by Sthanu Ravi Varman (AD 844-55). Rama Varma Kulasekhara (1090-1102) was the last successor of the Chera Kings. He transferred his capital from Mahodyapuram to Quilon when the Cholas attacked it during his rule. His demise ultimately marked the end of the Chera Empire.

The royal family of the Cheras most probably mingled with the Venads and their successors came to be known as Venad Cheras. One of the most significant of theVenad rulers was Udaya Martanda Varma (1175-1195) who inherited the throne in the 18th century and took the Venad kingdom to its summit. He erected the majestic Sri Padmanabha Temple of Trivandrum and drove outrooted the Feudal Landlords. He was succeeded by Rama Varma who was widely known as Dharma Raja and was the greatest of all Venads. After the decease of Ravi Varma , there were not many significant rulers and the kingdom dawdled on before it crumbled down at the end of the 18th Century.

Emergence of Calicut -The Zamorins meaning Lord of the Sea ruled Calicut or Kozlikode from many generations and during the rule of these medieval rulers of the 14th Century, Calicut became a significant seaport as trade. They traded with the Chinese and Arabs and earned loads of revenue from them. Along with the boom in trade and commerce there was also striking progress in art and culture. However, Calicut is famously associated with that famed place where the world -famous European sailor Vasco da Gama who set his foot ashore in 1498. Vasco da Gama’s landing at Calicut added a novel episode in the history of Kerala as the epoch of European conquest commenced. The Portuguese associations led to the synthesis of political as well as cultural and social factors. Vasco da Gama’s discovery of the new sea route also paved the way for the arrival of other foreign powers such as the Dutch and the French in Kozlikode or Calicut in Kerala.

Trade Link with Dutch – After the Portuguese, it was the Dutch who settled in India and established the Dutch East India Company in the year 1592. In 1604, the Dutch came at the Malabar Coast and diplomatically taking advantage of the existing enmity between Kochi and Kozhikode, they drove away the Portuguese from their fortresses. The Dutch and the British jointly abolished the monopoly of the spice trade of the Portuaguese. The Dutch dealt in the import of Coffee, Chinese silk, weapons, copper, mineral oil, coal etc and export of Pepper, coconut oil, cashew kernel, teak, rose wood and so on. The distinguished botanical work on the medicinal value of plants of Kerala, Hortus Malabaricus is attributed to them. The Dutch ascendancy in Kerala waned away when the ruler of Travancore, Marthanda Varma (1729-1758) defeated the Dutch powers in the conflict of Koiachel.

Mysore Invades Kerala – In 1766, Hyder Ali, the ruler of Mysore invaded Malabar. In 1773, Haider Ali once again expanded his territory by invading Trichur. Haider Ali’s son, Tipu Sultan known as the tiger of Mysore inherited the throne in 1782 and took the possession of the whole of South Malabar in 1783. But in 1790 when Tipu just coped to transgress Travancore, the Third Mysore War broke out and this marked the doom of Tipu Sultan as he had to surrender his territories to the British authority. The Treaty of Serirangapatam in 8th March, 1792 made Tipu Sultan cede the kingdom of Malabar to the British.

British Rule in Kerala – Following the Portuguese, the British also landed in South Indian Peninsula lured by the lucrative trade possibilities in spice, expensive gems and other resources in this bounteous country. Ralph Fitch was the foremost Englishman to visit India in 1583. British ascendancy in India initiated in the seventeenth century and lasted for two centuries till the independence of India. By 1806 Cochin, Travancore and Malabar in the north were brought under the British Madras Presidency. The British Supremacy however witnessed many social and cultural changes in Kerala. English missionaries brought great alterations and improvements in the livelihood of the people. During this epoch numerous educational institutions and hospitals were raised. Infrastructure was developed including railway lines, roads and bridges. However in the 18th and 19th centuries there were numerous revolts and rebellions opposing the colonial power.

The Growth of the National Movement – There were innumerous revolts against the British Supremacy and by 19th century, the infuriated masses tried to throw off the yoke of British domination. In Travancore, Velu Thampi Dalawa revolted against the British. The early upheavals and clashes against the Colonial power, like the Mappila Rebellion of 1921, Pazhassi revolt were crushed effectively by the British. Khilafat Movement followed .Mahatma Gandhi provided the impetus to this national movement and The non-violent Guruvayoor Satyagraha movement and the passive Vaikom Satyagraha movement helped the ingress of the backward social classes to the public roads adjoining the Vaikom temple. The Samyukata Rashtriya Congress consisting of a confederation of Christian’s -Muslims – Ezhavas (a powerful community of Kerala) formed merged to create reservations in Government and thus community based party system came into Kerala’s background for the first time. In Cochin, Prajamandalam came into existence. Some prominent leaders who were a part of Indian National Congress from Kerala were G.P. Pillai, Rairu Nambiar and Sir. C. Sankaran Nair. Finally Communist Party of India came into being in Kerala in 1939. The Quit India movement in 1942 had its affected Kerala. The Punnapra Vayalar revolt of 1946 led by the communists was a part of the nationalistic struggle.

In 1956, 1st of November, modern Kerala emerged from Malabar which was a part of the Madras Presidency, Kochi and Travancore.