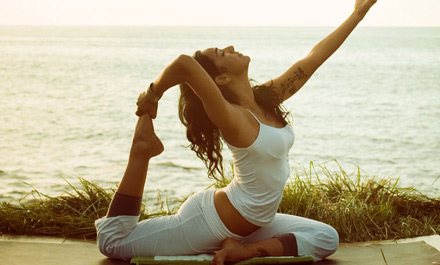 Yoga is the ancient Indian system of life for the betterment and harmony of body, mind and inner spirit. Though yoga originally aims at spiritual attainment through controlling the mind and body, in modern times, it is referred to the set of physical exercises for body and meditative practices for mind.

Derived from the Sanskrit root ‘Yuj’ meaning to yoke, yoga unites the powers of body, mind and soul to God. For attaining the aim of yoga the fluctuations of the mind have to be stilled. The three main pathways enunciated in various scriptures are Karma yoga (path of action), Bhakti yoga (path of devotion) and Jnana yoga (path of wisdom).

Some scholars believe yoga, though not as a comprehensive system, originated as early as five thousand years ago during the period of Indus Valley civilization. They substantiate this claim with the seals discovered from Harappa and Mohanjo-Daro, city settlement sites of Indus Valley civilizations, which have figures in meditation poses inscribed on them. Though they are believed to be precursors of the yoga system, inconclusive evidence for its development during the Indus Valley period has not yet been proved.

Yoga is one of the six systems (Nyaya, Viseshika, Sankhya, Yoga, Purva Mimamsa, Vedanta) of Indian philosophy, and deals with the transcendental thoughts. The idea of controlling the mind through a series of systematized methods was integrated by Patanjali (a scholar), even though it had a role in the study of Upanishads and Bhagavat Gita. Yoga Sutra, written by Patanjali in 5th century AD is considered to be an epic in Yoga tradition.