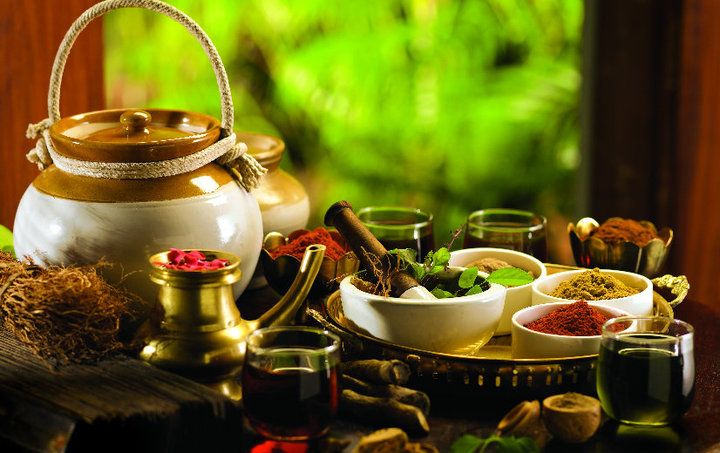 Ayurveda, the science of life and longevity, is a herbal system of medicine which evolved in India around 600 BC. Ayurveda offers treatments for various ailments affecting the body and mind. This time-tested science does not have any side-effects, which has made it popular all over the world.

Panchakarma, the rejuvenation therapy in Ayurveda, consisting of herbal medicines and body massage, is an effective therapy for stress relief, healthy living and longevity. In India, especially the state of Kerala, there are a large number of hospitals offering traditional Ayurveda treatments in the comfort of modern amenities.

The history of indigenous Indian health science is probably as old as the Indus Valley Civilization dating back to 3000 BC. The remains of deer antler and bitumen found in Harappa testify to the existence of a medical science.

The Atharva Veda has many hymns eulogizing herbs. The Atharvan hymns chanted for the cure of diseases were known as ‘Bhaishajyam’ and those for attaining longevity and prosperity were called Ayushyam. These hymns, especially the Ayushyams are considered to be the foundation for advances in later medicine.

The emergence of different schools of Sanskrit philosophy like Nyaya, Vaiseshika, Sankhya, Yoga, Vedanta and Mimamsa was another landmark in the history of the science of Indian medicine and health. The principles expounded in these philosophies facilitated the development of Ayurveda’s theory of humoral pathology which propounds that the human body is composed of Trisdoshas – the three humors – Vata, Pitta and Kapha. The Tridosha in equilibrium are called the Tridhatu. The body in which these three humors are in state of equilibrium enjoys perfect health; their disequilibrium causes ill health.

Diseases and causes have been mentioned in the classical texts of Charaka, Susruta and Vagbhata and also in Sarangadhara’s compendium. Madhava Nidana is a well known book on diagnosis. Other books which deal with diseases and health are Chakradata and Bhaishajya – Ratnavali.

According to Charaka, the essentials for diagnosing a disease are Pratyaksha (perception), Anumana (inference) and Aptopadesa (authoritative instructions from classical texts).

In Ayurveda, rejuvenation or Rasayana Chikitsa is the golden way to attain longevity and health. An elaborate description of this process of revitalization can be found in the classical texts. ‘Pancha’ means ‘five’ and ‘Karma’- ‘action’. The five-fold therapy is aimed at Shodhana, the eradication of the basic cause of disease. Shodhana along with Shamana, the mitigation of the disease and its symptoms, are the two concepts of disease management in Ayurveda.

Ayurveda treatments – a word of caution

Travellers to India are advised to take Ayurveda and Panchakarma therapies from recognized hospitals and centres. Panchakarma should not be mistaken as a mere massage therapy since it involves many other elements, including proper medication, which may differ according to the patient.

In Kerala, a state known for its ancient and continuous tradition of Ayurveda, the State Tourism Department has the list of authentic treatment centres in that state.