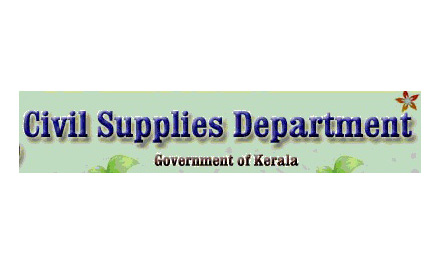 The Civil Supplies Department discharges the important responsibilities of Public Distribution, enforcement of markets discipline and promotion of consumer awareness and protection of their interest. In the 60s and 70s it won many accolades for the pioneering achievements in the implementation of Universal Rationing System.The Department of Civil Supplies functions under the Department of Food, Civil Supplies and Consumer Affairs of the Government of Kerala.

Kerala State has the privilege of having the best system of Public Distribution in the whole country. The system is evenly spread over the whole state without any distinction between urban or rural. To ensure equitable distribution of the food grains at a fairly low cost to all people especially to the weaker sections of the population. There is a very good net work of wholesale and retail outlets for the distribution of rationed articles under the Public Distribution System. In each Taluk, with every AWD and KWD, a set of ARDs are permanently linked. Under this system, the requirement of each AWD and KWD in the State is fixed and this facilitates the District Supply Officer who is the Departmental Head of the District to make allocation of the Rationed Articles to the Taluks in each district and the Taluk Supply Officer in turn to make allocation to the AWDs and KWDs in his Taluk. State Average of Ration cards per Ration shop is 400. On the supply side, there are 14203 retail outlets at present, in the state.

The Central Norm of one Fair price shop for 2,000 population has already been achieved in Kerala and normally no card holders here need travel more than 2 Kilometer to reach his fair price shop even in the remotest area. However, new fair price shops are being opened mostly in tribal and hilly areas as and when found necessary reviewing the needs of the people of the locality and giving preference to Co-operative sector/ women/ unemployed rural youth/ SC/ ST. Also the department has a state wide monitoring mechanism to watch the availability and prices of various essential commodities so as to prevent food adulteration, hoarding and price hike etc. Timely actions were initiated wherever necessary to prevent such incidence.

Mission and Vision of the department

Activities of the Food and Civil Supplies Department attained tremendous achievement during the past three years. Public Distribution System was made more attractive. The ration cardholders deserted the ration shops during 2002-2005 due to the poor quality of ration articles. It was noticed that only two percent of card holders approached the ration shops at that time. Now it is increased to 55 to 60 percentage. This is because of the quality of food grains distributed through PDS. It is the first time in the history of Kerala that the Government of Kerala has started supplying rice at Rs.2 per KG to two lakhs of Below Poverty Line families.