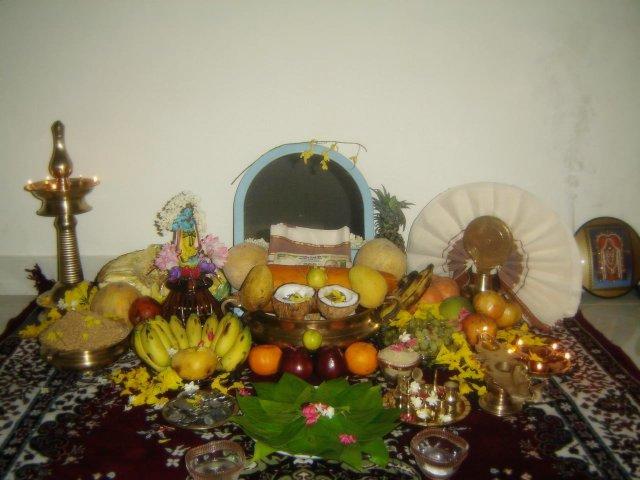 Vishu is astronomical new year day festival held in the state of Kerala in South India (and adjoining areas of Karnataka and Tamil Nadu). The festival is celebrating in the first day in the Malayalam Month of Medam (April – May). Vishu is also considered as the harvest festival of Kerala and thus the importance of this day to all Malayalees. In Kerala, the start of the Zodiac New Year*—when the sun enters into Sidereal Aries, Ashwini nakshatra—is celebrated as Vishu. It is said that what one sees when one first opens one’s eyes on Vishu morning is an indication of what one can expect in the year to come. Thus on Vishu, effort is made to assure one opens one’s eyes before an auspicious image—the Vishukkani. The Malayalam word kani literally means “that which is seen first,” so “Vishukkani” means “that which is seen first on Vishu.” While the festival is called “Vishu” only in Kerala, across India festivals sharing the same spirit—such as Ugadhi in Andhra Pradesh and in Karnataka, Gudi Padwa in Maharashtra, Bihu in Assam and Baisakhi in Punjab—are celebrated around the same time of year.

One of the most important festivals of Kerala, Vishu is celebrated in the month of April. According to the old traditional Malayalam calendar, it is the 1st day of the New Year. The main event of the Vishu celebration is the ‘Kani– Kanal’. Coconuts, fruits, cereals, and Konna flowers are kept in big pots to prepare Kani. Behind this pot, a mirror and a garlanded statue of Krishna are placed. Early morning on the Vishu day, the master of the house views the Kani, followed by the rest of the family. Children are brought blindfolded to see the Kani. The elders in the family hand over money to the youngsters and bless them. According to the local beliefs, if you see Kani, good luck will stay with you till the year end.

Vishu” is celebrated with more fanfare and vigour in North Kerala as compared to other parts of Kerala. Bursting crackers is part and parcel of the celebration especially for children. Elders gift firecrackers to children and every child vie with each other to make a world of their own. The smell of the lingering smell of the fire crackers on a Vishu morning is a long cherished nostalgic memory of any Malayalee. The people wear new clothes (Puthukodi) for the occasion and the elders of the family distribute tokens of money, called Vishukkaineetam, to the children, servants and tenants. People carry on this custom believing that in this way, their children will be blessed with prosperity in the future.”