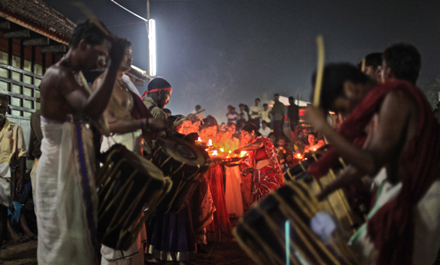 The Valliyoorkavu Festival is dedicated to Goddess Bhagawathy or Durga and related to the Valliyoorkavu Bhagavathi Temple is a spiritual destination situated at Wayanad. Valliyoorkavu Bhagavathi Temple is a Wayanad temple located at eight kilometer distance from Mananthavady. The principal deity of this temple is mother goddess Durga. Three principal forms of the principal deity are Bhadrakali, Vana Durga, and Jala Durga. This festival is considered to be one of the sacred festivals in Kerala. There are hundreds of tribesmen in the district who celebrate this festival in Kerala. It is celebrated in the Wayanad district of Kerala. The idol of the temple is believed to be self- manifested and the annual festival is held in March. The traditional ritual of the Kalamezhuthu is performed during all nights of the festival.

Valliyoorkavu Bhagavathi Temple is an important worship place for the Wayanad tribal communities. Every year there is a fifteen day festival celebration which can fall in the months of February, March and April and the exact date id decided. Valliyoorkavu Bhagavathi Temple is at a twenty four kilometer distance from Kalpetta, and thirty one kilometer distance from Sulthan Bathery. It is located very near to Mananthavady.

On the concluding day of the festival, the various show of folk art forms are presented. The dances performed by the local tribal people, using local percussion instruments, which becomes the major attraction of the festival. The music show is known as Kalamezhuthu, which is a traditional sacrament, is performed during the nights of Valliyoorkavu Festival. On the last day of the festival we can enjoy varieties of folk art forms of Kerala. By watching the musical show one can understand the beauty of dances performed by the tribesmen. The musical instruments like percussion instruments are used during this festival. This vibrant festival of Kerala displays different dance and art forms of native Kerala. Valliyoorkavu Bhagavathi temple is a must see for tourists who visits in Wayanad.