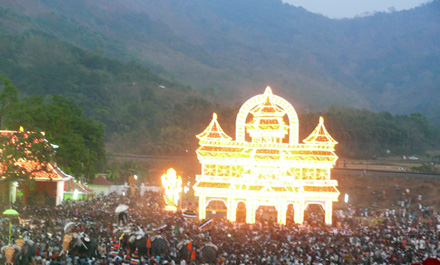 The Uthralikavu Pooram festival is dedicated to Goddess Kali,and is celebrated at the Sree Ruthira Mahakalikavu Temple in Vadakkancherry in the district of Thrissur in Kerala.The festival is celebrated in the month of ‘Kumbham’ according to the Malayalam calendar. The Uthralikkavu festival is conducted during early summer every year mostly during February to March. The temple is set up amidst the paddy fields and surrounded by a chain of highlands and hills, the temple compound forms a rather arena-like stage where the Pooram and its associated features such as elephant procession, fireworks, percussion orchestra etc.

The festival is adorned with colorful elephant processions during the day and night, with the accompaniment of the resounding Panchavadyam and the Pandimelam – two types of drum orchestration quite loved by the devotees and also onlookers and tourists who are not from Kerala or not of the same religious faith.Apart from the elephant procession, at Uthralikkavu, there also held are Kuthira Vela which is known as a procession with Wooden Horse and a variety of such other events dedicated by various communities.The evenings are eventful with rituals and folk art performances in the temple courtyard, in the glow of the huge brass traditional temple lamps, keep their flame alive right into the dawn. On the concluding day is the spectacular all-night pooram parade, the highlight of the festival.The fireworks is considered as the second biggest fireworks after Thrissur Pooram.The elephant parade and the fireworks are a must see of this Uthralikavu Pooram festival so make sure to see it without a miss.