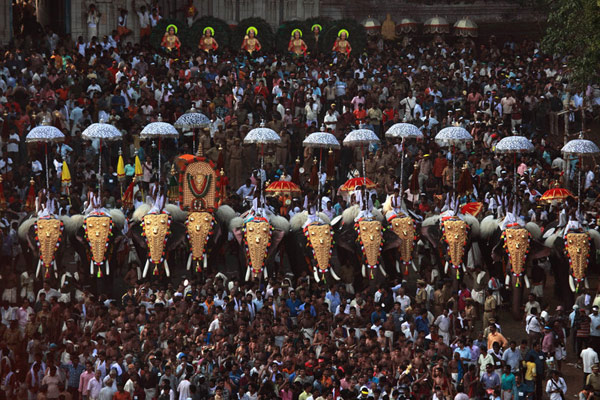 Thrissur Pooram or Trichur Pooram Festival is considered as one of the most colourful temple festivals of Kerala celebrated at Thrissur, the Cultural Capital of Kerala. The annual Thrissur Pooram Festival is celebrated in the sprawling Thekkinkadu Maidan (Thrissur Swaraj Round), on the premises of one of the largest and ancient Shiva temples in Kerala, the Vadakkunnathan Temple at Thrissur. Celebrated on the Pooram Nakshatram day in the Malayalam month of Medam (April – May), Thrissur Pooram is known as the pooram of all Poorams and the mother of all temple festivals in Kerala due to its unique style and its largest gathering of people to a single event from all parts of the Kerala and neighbouring states.

Thrissur Pooram is celebrated at the premises of the Vadakkunnathan Temple, situated on a hillock (Thekkinkadu maidan) right in the centre of the city, on the Pooram day in the month of Medom (April-May). Processions of richly caparisoned elephants accompanied by percussion ensembles from various neighbouring temples culminate at the Vadakumnathan temple. The most impressive processions are those Thriuvambadi Bhagavathy from the Thiruvambadi Sri Krishna Temple and the Paramekkavu Bhagavathi from Paramekkavu temple. The celebrations which last for over 36 hours includes parasol displays and firework shows.

The main attraction of Thrissur Pooram is the processions of luxuriously decorated elephants from various neighbouring temples, drum concerts, parasol exchanges, and magnificent spectacle with fireworks. The processions from Paramekkavu Bhagavathy from Paramekkavu Temple and Thriuvambadi Bhagavathi from the Thiruvambadi Sri Krishna Temple are the most impressive processions in the Thrissurpooram. The celebrations of the Thrissur Pooram festival last for more than 36 hours. It was Sakthan Thampuran (1751 – 1805, also known as Raja Rama Varma, the Maharaja of the erstwhile Cochin State, who first introduced the cultural festival, Thrissur Pooram in the late 18th century.