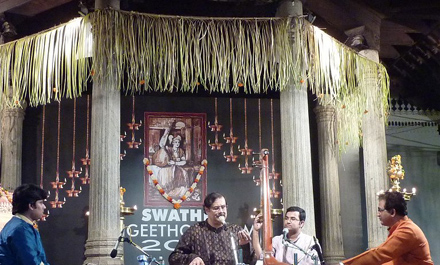 Swathi Sangeethotsavam (Swathi Music Festival) is a week-long festival of music celebrating the compositions of Maharaja Swathi Thirunal. The festival is held in the month of January every year at the courtyard of Kuthira Malika, Trivandrum. The event attributes Hindustani and Carnatic classical music. The concerts are not ticketed. Swathi festival is a gala event of music organized by the Government of Kerala every year in the last week of January.

Swathi Sangeetholsavam or Swathi Music Festival is a tribute to Swathi Thirunal and is a celebration of his musical works. It is held in the Kuthiramalika palace, which is one of the several palaces belonging to the Travancore royal family, near the famous Sree Padmanabhaswamy temple at East Fort in Thiruvananthapuram. A patron of music and a musician himself, Sri Swathi Thirunal Rama Varma, the erstwhile Maharaja of Travancore set a new course and direction to the musical tradition of Kerala. This great connoisseur and composer has to his credit more than 400 compositions in Carnatic music as well as Hindustani music.