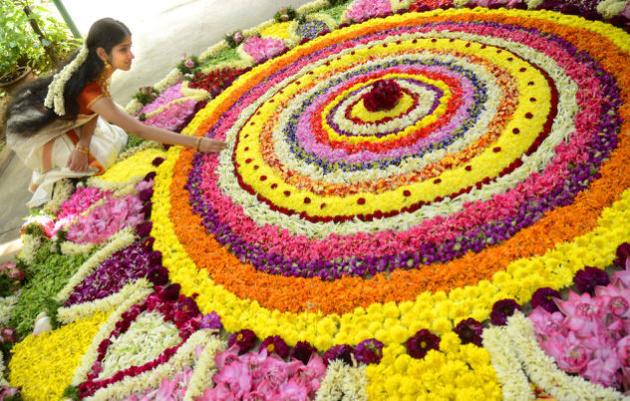 Onam – The State festival of Kerala

Onam – the state festival of Kerala – is celebrated with great enthusiasm. Onam marks the homecoming of legendary King Mahabali and is an annual harvest festival, celebrated mainly in the south Indian state of Kerala. It is a popular festival among the cultural repertoire of Malayalees, and falls during the month of Chingam (August/September as per the Gregorian calendar), the first month of the Malayalam calendar, and lasts for ten days. Traditionally celebrated as a harvest festival, mythologically it is linked to Malayalee–Hindu folktales; but Onam is celebrated by people of all religions . The onam is observed when the moon is in Sravana nakshatra in the month of solar Bhadrapada (Simha Surya) as a madhyahana vyapini purvaviddha (Ref: Indian Calendric System.)

Onam is celebrated by generating arts by flowers (pookalam) in front of residence. It commences from atham (ten days at the rear of Thiruvonam). Everyday early morning the aged pookalam will be eliminated and fresh new one will be manufactured. The measurement and high quality of the pookalam (Flower artwork) will enhance day by day & on 10th day which is Thiruvonam it will be extremely grand. On Thiruvonam Malayalees will do pookkalam within their residence, drawing rooms etc. This Pookalam will be eliminated only on third day.
Onam been part of Malayalee ( People of Kerala ) psyche for centuries. There are records of Onam being celebrated during the Sangam Age.

The earliest record of Onam is found during the time of Kulasekhara Perumals around AD 800, soon after the Kalabhra Interregnum of Kerala History.The festive season of Onam, which falls on the Malayalam month of Chingam, every year (between August and September), is a ten-day carnival for the Malayalees all over the state, country and abroad. Being a harvest festival, it is time to thank God for the bountiful yield. According to the stories in Hindu epics, Mahabali, the legendary King of Kerala, visits the state every year during the Onam festival, to ensure the wellbeing of the people. He is welcomed to his kingdom with reverence. The festival is all about relishing on the grand Onasadya (traditional feast of Onam), shopping, family reunion and welcoming King Mahabali by spreading good cheer.