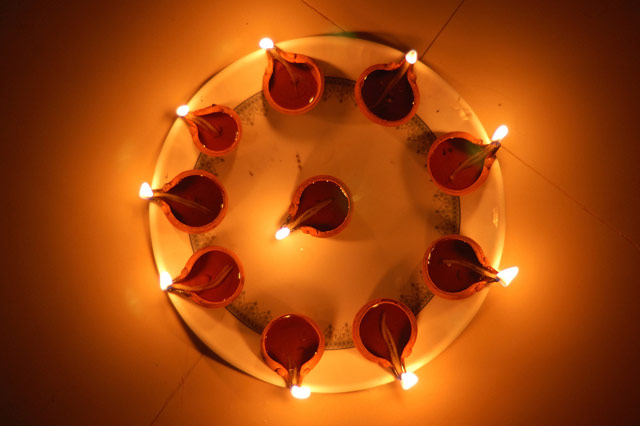 A colorful festival that is celebrated by all Hindus worldwide is Deepavali, which is also known as the festival of lights. “Deepawali” (also transliterated as “deepaawali“) literally means a row of lamps (“dipa” = lamp and “aawali” = row, line). In due course, the popular name has shortened to Diwali, especially in northern India. This festival usually falls around late October and November. One important practice that the Hindus follow during the festival is to light oil lamps in their homes on Deepavali morning. By lighting the oil lamps, the Hindus are thanking the gods for the happiness, knowledge, peace and wealth that they have received. The Hindus consider Deepavali as one of the most important festivals to celebrate.

The legend behind this festival is that Narakasura, a demon, ruled the kingdom of Pradyoshapuram. Under his rule, the villagers suffered a lot of hardship as the demon tortured the people and kidnapped the women to be imprisoned in his palace. Seeing his wickedness, Lord Krishna set out to destroy the demon and the day Narakasura died was celebrated as Deepavali, the triumph of good over evil! The Hindus usually awake early in the morning of deepavali around the brahmamuhurtam (3am) and the first ritual will be having an oil bath, which is an important feature of Deepavali. Hindus will be dressed in their new clothes on Deepavali.

Diwali (or Deepavali) is a major Hindu holiday, and a significant festival in Hinduism, Sikhism, Buddhism, and Jainism.Adherents of these faiths celebrate Diwali as the Festival of Lights. Diwali celebrates through festive fireworks, lights, flowers, sharing of sweets, and worship. The houses would be decorated with oil lamps and children will play with firecrackers to celebrate the festival. On the first day, they would not go visiting but would stay at home to welcome the guests who visit them.