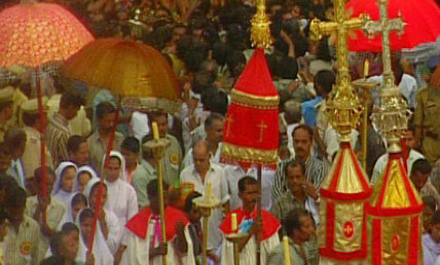 Arthunkal Perunnal is a grand festival mostly celebrated in the Christian community. Arthunkal is a small seaside village, situated in the west of Cherthala and north of the Alappuzha town, in the Alappuzha district of Kerala state, South India. Primarily a fishing village, this calm area has witnessed fast development since the late nineties, in sync with Cherthala, a small satellite town of Kochi, the biggest city in Kerala. Arthunkal is one of the most important pilgrimage sites in Kerala. It is considered as a holy land by hundreds of thousands of devotees, of Christian as well as other faith. The village is synonymous for its church, which has the Roman martyr Saint Sebastian as its patron.

The feast of St. Sebastian in Arthunkal is a grand celebration extending for two weeks in January. While the main day of the traditional feast or the Perunnal is on the month of January. Devotees from all across the state visit the church on the feast days. A procession, carrying the graceful statue of St. Sebastian, from the church to the beach and back, is the most important event of the feast. Interestingly, an eagle is seen roaming the skies, every year during the time of the procession.

This eagle too has become part of the grandmother stories, about the presence of St. Sebastian as a guardian saint for the village. Arthunkal Perunnal Kerala is a ten-day festival which falls sometime in the beginning of January. It is considered to be a real visual treat for the tourists who flock at the spots during the festival season.

Arthunkal Perunnal is regarded as one of the most meaningful celebration of ritualistic beliefs. It is one of such festivals which highlights the truth of the state. The highlights of the concluding day of the festival include an extraordinary ritual devotee’s crawl on their knees all the way from the nearby beach to the church. Following these rituals there is a ceremonial procession to the beach.